For St. Patrick’s Day, one may think it’s unusual to turn to the book Brew Britannia by Jessica Boak and Ray Bailey. Yes, it covers the recent history of British beer industry and it’s a thoroughly engrossing read as well. However, the book’s subtitle is the “strange rebirth of British beer” and there are plenty of Irish connections throughout.

Many people would have heard of Campaign for Real Ale (CAMRA). This consumers’ movement has become a British institution in its own right. Few people may be aware that this organisation was conceived during a lad’s trip to Ireland back in March 1971. The idea for launching the “campaign” and early ideas for the acronym were discussed in and around St. James’ Gate. Eventually they settled on the Campaign for the Revitalisation of Ale. The inaugural meeting of CAMRA took place Kruger Kavanagh’s pub in Dunquin, Co. Kerry on 23 March 1971 “probably”. While the four holidaymakers were already concerned with the state of British beer, apparently Smithwick’s “offered a nightmarish vision of what might to come to pass back home”. Although apparently the lads were also concerned by the lack of Indian restaurants in Ireland at the time and it is possible that if the beer was better, they might have gone and founded the Campaign for Indian Restaurants instead. 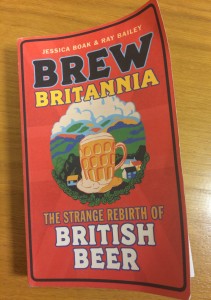 The revival of brewing in London has a significantly Irish tinge to it. People may be familiar with Evin O’Riordain who founded The Kernel Brewery and has been part of the revived interest in the more American-inspired offerings. However, the capital’s brewing revival can be traced back to Patrick Fitzpatrick, a son of Irish publicans who operated pubs in London and Dublin. In 1977, Fitzpatrick was to open Godson’s Brewery, with the name borrowed from his hop merchant. Perhaps it was canny business sense not to use a distinctly Irish name back in the late 1970s Britain. He made a point of brewing naturally and stating that he used no added sugar or adjuncts. By 1980, his beers were available in Amsterdam but “before long, everything that could go wrong for Fitzpatrick did”.

There’s a great section on the “pioneering” Belfast-native Brendan Dobbin. Rejected for a Guinness job, the Heriot-Watt educated brewer gained experience at Ringwood Brewery before moving to the new Antrim-based start-up Hilden Brewery in 1982. He firmly holds the view that he was the first microbrewer in Britain and Ireland to make lager. After a short stint with Hilden, Dobbin headed off to the US to discover new beer styles. Arriving too late for a brewing job, he worked with Campbell’s soup of all places. Nevertheless, he developed a knowledge of west coast hops, particularly Cascade and was to take this to Britain when he moved back in 1985. First, working back at Ringwood and then to opening his own brewery and pub in Manchester. The West Coast Brewery was located in the King’s Arms Hotel in a fairly rough area that bordered the Moss Side.

By the time Dobbin had opened the pub and brewery, he had already been experimenting for years with new world hops from as far away as New Zealand. This was cutting-edge stuff. He also had a knack for making clones. His clone for Sierra Nevada Pale Ale won prizes and the silver it took at the 1989 Great British Beer Festival brought Dobbin’s work to the attention (for the wrong reasons) of Ken Grossman and his Chico-based company. Dobbin renamed his beer Yakima Grande Pale Ale. While noted for his use of new and innovative hop varieties, Dobbin was “scornful” of ‘hop heads’ because “hops aren’t the only flavour in beer…So, no hops aren’t everything”.

By 1995, Dobbin decided he had enough of running the brewery and operating the pub in pre-urban regeneration and a little to mad for ‘Madchester’. He shut the brewery down and then focused for a while on installing brew-kits for the Firkin chain of brewpubs. He also consulted in Ireland for Clare’s Biddy Early Brewery as well as brewpubs Messrs Maguires and the Porterhouse in Temple Bar. One slight omission in this book is the role that the Porterhouse played in the London beer scene. When it opened in Covent Garden back in 2000, it was only the second specialist beer pub after Mark Dorber’s phenomenal White Horse (learnt from the book that the pub had an unwelcome nickname, “The Sloany Pony”)in Parson’s Green. Dobbin can be found down in Bandon, Co Cork as a quasi-hermit/banana grower. He recently was involved in installing the kit into yet another brewpub, this time for the Cotton Ball in Mayfield in Cork.

Great British Menu judge Oliver Peyton, popularly known for having “his face permanently contorted into a look of disgust and boredom”, makes an interesting appearance in the book. Mayo-born and Sligo-schooled Peyton became a beer importer in Britain during the 1980s and even held the exclusive UK rights for Sapparo. Before becoming a restauranteur, he also operated a number of clubs around London.

In 1996 he opened Mash and Air in Manchester, a venture that combined two different dining experiences and a microbrewery. He hired Alistair Hook, who would go and found Meantime Brewery, as head brewer. Lunch menus while pricey had a brewery tour and beer tasting thrown-in. Apparently the high prices “alienated more traditional beer enthusiasts” as did the did the styles brewed. According to Peyton, they were “nothing like the kind of one-dimensional British beers there were then”. This gastro-brewery concept was once thought to have the potential to expand like Belgo (remember that?) but it stopped at two locations. The Manchester operation ceased trading in 2000 and while the Great Portland Street restaurant is still going, Peyton’s no longer involved and brewing halted in 2007. However, the book hints that we may not have seen the last of his involvement in the beer scene and he may make a return as part of his burgeoning culinary empire.

It would be hard to write a book about British brewing today without mentioning Fergus Fitzgerald from Limerick, who’s head brewer at Adnams. He pops up in the book during a section on the uneasy relationship between ‘real ale’ and ‘craft beer’. Adnams are long noted for real ale but have been taking on-board (they love their nautical references) some trends some may commonly associate with the ‘craft beer’ camp but they ignore the fact that breweries like Adnams were craft before craft. On their Innovation brand, he says: “Fair enough, it’s been ‘pimpled’ now, and has more horsepower, some shine new banners and has been fitted with a ‘banging’ sound system so you can hear it coming, but it’s still the same wagon”.

This book traces the revival of British beer from the early days of tie-wearing members of the Society for Preservation of Beers from the Wood to CAMRA to the rise of pubcos and Thatcher’s de-regulation of the pub industry. It takes in the faces and places of breweries started in the last forty years, including those counter-revolutionaries to real ale. At each step, there’s seems to be an Irish hand. There could be more as this book is peppered with names such as Sean Franklin, James Lynch, Roger McBride etc. It’s possible they have Irish roots too. Dave Bailey also gets a mention and he practically deserves a passport for the number of appearances he’s made at Irish festivals and Hardknott’s collaboration with Waterford’s Metalman Brewery.

Ultimately, it’s an enjoyable read and is written in a style that makes you feel part of the journey. It’s a skill that many history writers lack. You can also check out their musings on their blog: http://boakandbailey.com/

Launched at the All-Ireland Craft Beer Festival was The Good Craft Brewery Guide: Ireland by Tim O’Rourke. It provides an introduction to twenty-four breweries and their brews. Now before I go any further, Franciscan Well is included and I know that some would object to its inclusion but it is an indication of the fast changing world of brewing in Ireland and the lack of an agreed Irish definition for “craft” beer. More importantly it is reflective of Tim’s recent activities in Ireland as he is training unemployed people to be brewers though the Taste 4 Success Skillnet (he is currently running a course in Cork this week) and trying to get them placements in working breweries or encouraging them to start their own. In researching this book he attempted to visit all operational breweries in a short space of time, it is perhaps unfortunate that some of “the breweries coming to a town near you soon” have already launched such as Kinsale Craft Brewery and Mountain Man Brewing. It is not a trawl of the wealth of information on the Beoir website. For those that frequent there, they would have more up-to-date information on specifi breweries (e.g. Red Hand and Baile Brew). This shows why  the more information out there on Irish brewers the better, especially for tourists. Resources such as this books shared light on these new and forthcoming breweries and provides addresses and other contact information. Given some of the more unique names of breweries here (e.g. White Gypsy, Bo Bristle, 9 White Deer etc) it can be tricky for the uninitiated to locate them. 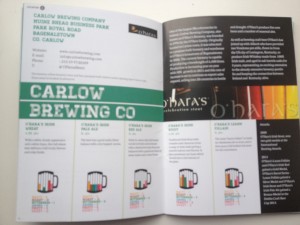 Now those who know Tim, he has a wealth of information on brewing and breweries. Not only has he had over 40 years of experience in brewing for some of the biggest breweries in Britain and consulting for a number of start-up breweries around the world, he is also a brewing educator. He has trained countless brewers through the Institute of Brewing and Distilling (UK). He led the Great Baltic Adventure, doing what Pete Brown did for the IPA, by seeing a new  resurgence in Imperial Stouts in the UK (it was on this journey that the Black Sheep’s Imperial Russian Stout was first developed).

While this short book may not go into breweries in serious detail (what can you you expect in publication of 50 odd pages), its target market is those interested in finding out about Irish breweries and their beers. Tim brings his ability to broaden the knowledge of beer amongst non-technical people to bear in this book. This is best seen in the highly visual and easy to understand reviews of the various offerings from each brewery profiled. Each beer is ranked according to five characteristics: malty, roast, bitterness, aroma, fruity and colour. Perhaps bars and off-licences will find this useful to educate customers about the beers for sale.

The Good Craft Brewery Guide can be purchased online at www.beoir.ie (€2 discount for members) or at www.beerireland.ie for €10 plus p&p. For further information email Tim O’Rourke on tim@brilliantbeer.com or call Sarah Roarty on 086 0450111.