Have we reached the point when beards or at the very least not shaving for a week or so is no longer confined to the hipsters. Perhaps we’ve reached a tipping point in the way that beards used to be associated more with trade unionists than trendiness. As someone who’s averse to fashion, this was a welcome development when I found myself not shaving for a week or so. It was certainly more convenient but eventually I got fed up with it.

Having a beard is not for me. I can certainly see why a fair few brewers have them, due to the early morning starts. Or in the case of Rogue’s John Maier it can be useful to cultivate a yeast strain. Instead, I’m happy sticking with a beer or two from Weird Beard.

The brewery is yet another one of those from London that is producing interesting beers. I’ve had a few of these over the past year or so and was impressed with Fade to Black (black IPA) and Black Perle (milk coffee stout). A recent beer I had from theirs is in keeping with my brief separation from my razor, Five O’Clock Shadow. 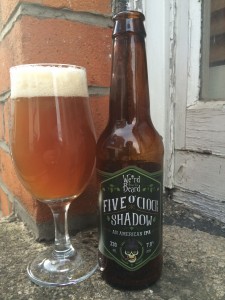 It’s a big IPA in terms of strength. At 7% abv it tips it at the higher end of the style. It pours a hazy, copper and orange. There’s grapefruit, pineapple, mango and a hint of passion fruit on the nose. However, the tropical aromas are perhaps more reminiscent of a sweet tropical fruit syrup. On tasting, you’re hit with the carbonation first with the topical fruits notes growing in the flavour. It’s as if this beer is determined to clean the palate before appreciating every sip. A chewy, sweetness develops as you drink before leading to a bitter and warming finish. It’s a subtle reminder of the beer’s strength. 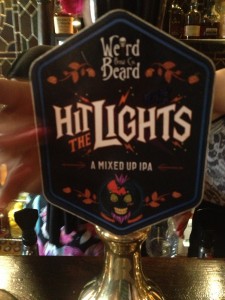 Hit the Lights is a 5.9% abv is billed as a “mixed up IPA”. It presents a golden orange colour in appearance. There’s rich orange and citrus on the nose thanks to the hop bill of Target and Aurora (bittering, flavour and dry hopping). It was slightly watery at first before a fresh fruit bitterness taking hold. The malt backbone lends a certain amount of sweetness to the flavour. There’s a sticky, bitterness to the finish that is reminiscent of a rich marmalade.

Weird Beard is a brewery that I will continue to look out for and hopefully more of their beers will find their way over here. Actually as I write this, I am reminded that a trip to London is long over-due.

I was out at a conference in Dún Laoghaire recently to hear about initiatives to revitalise town centres. There are clearly a lot of ideas floating about in how they can be improved. Over the past few years it was easy to see the effects the recession, the opening of the Dundrum Town Centre, aggressive clampers and other issues has had on Dún Laoghaire itself.

The conference due attention to the role independent retailers, restauranteurs and publicans can play in urban regeneration. However, it was also stressed that it was important to get the balance right in terms of attracting the chains etc. The town has seen Starbucks take root alongside prominent retailers as well. One of the latest and certainly high profile openings was JD Wetherspoons second Irish venture, The Forty Foot. Sharing the site and name of the previous incarnation, the pub is a departure from the sort of “village feel” Wetherspoons and fits in with the more modernist and light-filled of the large “corporate” Wetherspoons. 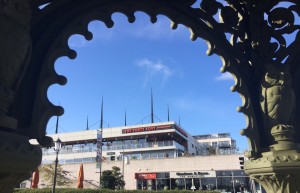 Spread over two floors, the 40 Foot has fantastic views over the harbour and across Dublin Bay. By all accounts it has a younger clientele to Blackrock’s The Tun Tavern, particularly at weekends. I only had time for a quick pint and of course opted for cask ale. Although it’s great to see Brú Brewery joining Eight Degrees in their Irish craft beer bottle range.

With the town formally being called Kingstown, I had the excuse to opt for Marston’s Old Empire, a 5.7% abv IPA. Martson’s is one of those breweries that lost a significant amount of charm over recent years. Yes, it’s still independent but it has grown through acquisitions. The Midland’s based company comprises the likes of Bank’s, Eversheds, Wychwood and has just acquired the brewing arm of Thwaites, including the Crafty Dan range. The brewery has embarked on a successful partnership with English cricket (more on that at another time). While Marston’s is firmly in the company of big independent brewers, it could suffer reputational damage along the lines of Green King. 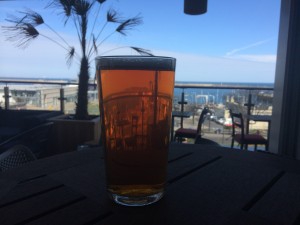 So out on the deck of the top floor of The Forty Foot, I tried Old Empire. The beer was a clear and bright copper colour. It was bronze almost and would leave those hooked on spray tans, satisfied. There was fresh orange and grapefruit on the nose but there was also a hint of toffee. On drinking, it was clear that this beer there was about chewy bitterness, little else. There was only the slightest sweetness on the back of the palate. It was slightly astringent in the finish. The toasted malt bill had too much burnt notes for my liking.

It’s interesting to note that the two outside areas of the bar are non smoking. Those wanting to smoke will find themselves confined to an area a safe distance from the main entrance. I will be back to the 40 Foot the next time I’m in Dún Laoghaire but I will opt for something else on cask.

Over recent months, I’ve had to travel to Cork for meetings. Unfortunately on each occasion, time didn’t allow me to catch up with the ever expanding beer scene in the city. Cork firmly holds the title of Ireland’s capital of craft beer (although not all breweries are located within the city boundary). What’s worse was that my last two trips were immediately following the Franciscan Well beer festivals.

The train service is fantastic these days. Gone are the long slogs up and down of old. So with that in mind, there’s a beer to sum up my trips over the past few months and that is Rocket Ship. This is a relatively new offering in bottles (it was first debuted at last summer’s Irish Craft Beer and Cider Festival) and it was a beer that finished off Easter for me. 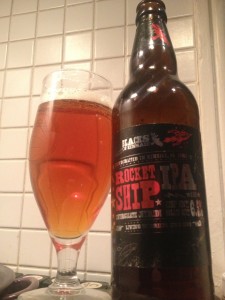 Rocket Ship is a double IPA (6.5% abv) brewed by Black’s of Kinsale. It pours a vibrant polished copper with a thick head. Lots of fresh fruit on the nose, including pineapple, passion fruit and a dose of grapefruit. The aroma was a melange of fruit a bit like the hit one would get in patisserie between fruit pastries, pavlovas and other fancy fruit tarts. There’s a hint of sweetness on the nose but that’s where it ends. The beer drinks dry, bitter and a there’s a tad spiciness to the taste, as if it was made with a pinch of rye. Grapefruit notes dominate. There are hints of slightly dried fruit but not sticky or sweet. There’s a good bit of bitterness in the finish but what would you expect from the style?

The brewery has certainly made an impact on the Irish beer scene and it hasn’t quite yet celebrated its second anniversary. I have seen first hand at beer tastings, people who weren’t keen on hop-forward beers certainly changing their views based on the Kinsale Pale Ale (KPA) and this has continued with the Black IPA. I do think people have underestimated the contribution KPA has made in terms of winning over new fans in a manner similar to Sierra Nevada’s iconic pale ale did for many a beer enthusiast.

It’s hard not to like Sam and Maudeline Black and their determination to live the dream attracted a fair bit of support through a crowd funding campaign. They’ve just launched another campaign to fund the brewery’s expansion. Hopefully this will see another double IPA, High Viz being released. It tasted fantastic at the recent Alltech Brews and Food fair. Also, cans of KPA can be expected to become a hot seller over the the coming months. With the weather improving (well this week at least), I’m looking forward to reacquainting myself with the brewery’s Session Pale Ale.