“We want to be one of the top 50 craft brewers in the world,” said Dr. Pearse Lyons. It’s as simple as that for one of Ireland’s most successful entrepreneurs. His ambition knows no bounds. It’s been a busy few years for Alltech in terms of growth. The company has sold off particular business units that were no longer of key focus and has also acquired a number of other companies to accelerate its growth. However, last week’s announcement was the first time that it purchased a brewery or two for that matter to boost its beverage division.

Alltech announced on 21 July that it has acquired The Station Works Brewery in Newry Co. Down and Cumberland Breweries Ltd, in Great Corby, Cumbria, England. The two breweries had been operating under the same ownership and had been positioning itself in the Irish market over the past number of months, on foot of its Finn Lager brand. Station Works had invested well on the branding and big hopes were being placed on its new Foxes Rock ale.

So what’s in it for Alltech? It gives them a foothold into Europe in terms of production and adds a few more beers to their portfolio. The distribution chain for Alltech is quite strong in Ireland but this deal potentially opens up the British market too. The Finn Lager could even be an attractive brand State-side. Foxes Rock could prove popular with the horsey-set (e.g. Leopardstown Races), which fits in with Alltech’s sponsorship strategy. More importantly it gives them two breweries with a combined output of 40,000 hectolitres. This gives them a platform to develop a new range of products or brew existing ones in Europe that could be sold to the local market as well as exporting further afield.

Some craft beer enthusiasts may find it difficult to accept Alltech as a “craft brewery” due to the fact that it’s part of a very large company. They’d point to the typical caveats of small, independent and traditional. As far as I’m concerned the brewery is craft. Yes, it may have corporate leanings but it’s also part of one of the biggest Irish family-owned start-ups. It’s a company that follows a path of increasing organically and through acquisitions, it’s the latter that mightn’t sit easily with everyone.

The big question is where next for Alltech? In order to achieve the target of being in the top 50 of craft breweries worldwide, surely more take-overs can be expected. Wonder if any will come from those that have participated in the Alltech Brews and Food in recent years? There were more than a few of them that came from far and wide.

It seems that the supermarket chains are getting in on this craft beer game. We’re familiar with Aldi stocking O’Shea’s stout, pale ale and red ale produced by Carlow Brewing Company.   A more recent entrant to the scene is Rye River, somewhat double jobbing with its Crafty Beer (Lidl) and Solas (Tesco) ranges.

Of course this is nothing new.  The tactic of ‘own’ or indeed ‘exclusive’ brands has been used for decades.  Think of cans or stubby bottles of cheap own-brand cheap lager that have littered many a student party or bbq over the years.  In fact it would appear that there are even more own-brand lagers appearing on supermarket shelves.  And it is a pattern replicated for cider as well.  So should we be worried when more and more ‘own-brand’ craft beers start appearing?

Well naturally it all comes down to quality.  And given how price conscious supermarkets are, we have to ask, can the two be combined?  The Carlow Brewing Company has demonstrated that it can with its O’Shea’s range.  The beers are great value and have introduced more people to the world of craft beer.  I know of one person, a die-hard Guinness drinker, often the hardest to convert, who when at home, drinks nothing but the O’Shea’s Irish Stout.   And he tells me that he’s tempted to explore different stouts as a result.  So if the supermarkets adopt a similar approach to the one they use when considering wines for beer, well it could be a win-win.  For example, how many times are we told that the ‘own-brand champagne is the one to seek out for value and quality?

Supermarket chains are more than likely to partner with larger craft brewers that have the necessary production capacity.  They are more likely to focus on session-type beers rather than extreme ones; although, BrewDog produces a “variant” of its 9.2% abv Hardcore IPA for Tesco.  For the brewers, it can be a valuable source of revenue; also regular and sizeable orders from large multiples can impress the banks when looking for loans to expand the business.  It is no surprise that lenders prefer big, dependable orders over smaller, though numerous accounts.

So why am I writing about this now?  Well recently I had the chance to try a number of supermarket-brand beers. It will come as no surprise that some were better than others, but what struck me was that some of those were considerably better than the rest.  I then recalled one of the first ‘own brand’ beers I had ever tried. Perhaps it was time to refresh my memory.

The ‘Revisionist’ range is produced by real ale behemoth, Marston’s and Tesco has an exclusive on the bottles.  It’s worth noting however, that beers like Craft Lager can be had on draft in the likes of Wetherspoons.  My local Tesco stocks the Red Ale, Rye Ale, Dark IPA and the Wheat Beer. The range also includes Steam Beer and Saison in bottles.  These beers are produced at the different breweries within the Marston’s stable (Bank’s, Jennings, Wychwood, Brakspear, Ringwood and Marston’s itself).

The Revisionist American Hop Rye Pale Ale – to give it its full name – was as I say, the first beer from the range which I tasted.  And if I’m honest, it is also the only one on which I have notes as I tried some of the others while judging a beer competition. 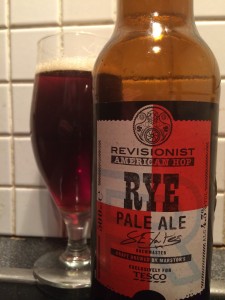 Firstly the branding is certainly interesting and certainly catches the eye, while scanning the shelves.  The beer pours an unsurprisingly amber colour with good clarity.  There are sweet tropical fruits and a hint of spice on the nose.  The beer was dry hopped with citra® and amarillo so that explains the fruitiness and the rye gives the spicy notes.  Initially, there is fresh citrus on tasting but a dry, almost Bombay mix-inspired spiciness takes over.  It is however, let down a little by the fluctuating carbonation levels. The dryness of the rye also leaves it tasting a little flat at times. It finishes quite dry.

It’s safe to say that the ‘Revisionist’ range encapsulates a problem for both the real ale brewers and for the retailers across the water.  Are they edgy enough in today’s fickle craft beer world?  Five years ago Tesco used to be the go-to place in this country if you were looking for English ales.  But now that range is dwindling, and not only in Tesco.  Yes, it’s a good thing that some of the space is being occupied by local Irish offerings, but part of me is sad to see that English brewers are being sought merely to imitate rather than innovate in terms of the beers to be stocked.   And yes these beers are fine, they do the job.  But I would argue that unfortunately they come in at too high a price point in Ireland to be deemed as good value.

Food Wise 2025, the new national strategic report for the agri-food sector was published this week. Craft beer and whiskey are designated key areas of focus over the next decade. This is the latest acknowledgement by Government that efforts must be made to allow these producers to continue to grow and expand.

The overall objective for beer and whiskey is to nurture the entrepreneurial spirit of the producers. A dedicated sectoral strategy is needed setting out “supports, targets and best practice for the entry, development and progression of these companies to 2025”. An increase in R&D and innovation across the sector is needed but for that to happen there needs to be a 10% increase in funding per annum. The need to develop skills in brewing and distilling is recognised, particularly in the areas of mentoring and training. I would like to see this progressed further into the development of a formal apprenticeship scheme for aspiring brewers. This would result in a blend of formal qualifications and on-the-job experience in a structured format.

Develop a sectoral strategy for food and drink SMEs, which sets out supports, targets and best practice for the entry, development and progression of these companies to 2025      Food Wise 2025

It is little surprise that a key focus is in boosting export sales. We’re a small island with a small but growing population. Yes, there’s plenty of room for breweries to expand at home but for those that want to, we need to help them gain access to international markets. One just needs to look at the approach that Carlow Brewing Co took all those years ago, a big effort in exporting because the market wasn’t really available in the country. That was when there were only a handful of craft breweries. We’ve over 70 now and the domestic market still has a long way to go in order to open fully to them. That is not to say that craft isn’t growing, it is and will continue to do so. I’m just saying a craft beer export strategy could really boost those already able to ship internationally. However, we also need to support those not yet ready but have aspirations to do so. Food Wise 2025 recognises the need to “continue to work directly with indigenous companies to identify new export market opportunities and develop services and supports for companies to facilitate export growth”. It also sees that specific market knowledge of the US market needs to be provided. This maybe more targeted at whiskey but there’s room for Irish craft beer too. The time has never been better for crafting an export strategy for beer.

The focus on beer in whiskey and beer in the report is hardly surprising. Minister for Agriculture and the Marine, Simon Coveney TD has been a more than a fair share of beer events during this time in the department. It’s a good news story, entrepreneurs starting up, producing products in the country and looking to export – what more could you need! However, there’s a growing trend that whiskey is getting more attention than craft beer. Yes, a distillery requires far more investment in capital than a brewery, not least with the three years needed for maturation alone. Also, whiskey has the snob factor and beer suffers unfairly for not been seen as civilised as other mainstream alcoholic drinks, with the possible exception of cider. The need to “develop an Irish Whiskey and food pairing trail as a major tourist attraction and to differentiate Irish food and drink produce” is singled out but we should also be pushing for a brewery tap licence to be introduced.

Beer, cider and whiskey makers must be equally respected, supported and championed. They all tell the same story. We can produce excellent, diverse and quality products on this small island of ours.