While the independent or craft segment may still be relatively small beer (0.8% in Ireland, 6.3% in the US), macro-breweries are increasingly looking to shore up their market share through the introduction of new products. It is the rate of growth in the “craft” sector that has raised their eyebrows. We’re seeing new lines of beers being introduced alongside their core brands. We just have to look to the introduction of Smithwicks Pale Ale and Calendonian Smooth into the Irish market within the past twelve months. There may be a lot of merit in the “consumer is favouring choice” argument as there seems to be a move away from manufacturing innovation to product innovation. Take for instance the range of Guinness products targeted primarily at the US market – Black Lager, Generous Ale and Red Harvest Stout. Perhaps in the Irish case it is also a response to the threat of Molson Coors ramping up their standing in the Irish market. 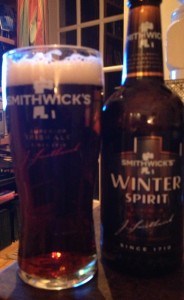 Smithwicks recently launched a new offering in the form of Winter Spirit, a 4.5% abv ale. It has a rich, ruby body that is still in keeping with the traditional Smithwicks red. It has a slight blackcurrant aroma, which is even more reminiscent of a bag of wine gums or jelly.  The taste is initially sweet on but becomes toastier as you progress.  It is fairly dry.  It almost lacks something in the body and has not the complexity nor weight you’d expect in a winter seasonal. It is slightly cloying and sweet fruits definitely dominate. On the bottle, they say biscuit flavours so I suppose the closest would be Jam Dodgers. Of course with any good Irish red, there are hints of dry roasted peanuts and toffee nut towards the end. While it’s not a winter ale, it is nevertheless an interesting variation on the standard Smithwicks and not simply a slightly more alcoholic version.