Today is Martin Luther King, Jr. Day in the U.S. Whilst it takes place on the 3rd Monday of January, Dr. King’s actual birthday is 15 January but for the purposes of this post, I thought it prudent to feature two beers from a brewery in the city of his birth.

Atlanta’s Sweetwater Brewery was founded back in 1997 by Freddy Bensch and Kevin McNerny, roommates at University of Colorado in Boulder (obviously a place to discover craft beer). Firmly embracing the importance of “localism”, the brewery takes its name from Sweetwater Creek, which flows off from the brilliantly named – and easier to say after a couple of beers – Chattahoochee River (any Alan Jackson fans out there?). The brewery’s motto is “don’t float the mainstream”, and it features prominently on all the packaging for its brews.

Sweetwater was one of the craft brewing outliers in the South. When I first started going to Nashville almost ten years ago now, their beers were one of the few regional beers regularly available, with their 420 Extra Pale Ale becoming an early favourite of mine. At 5.7%, it had enough fresh hop bitterness to be pleasant on those hot southern summer days. 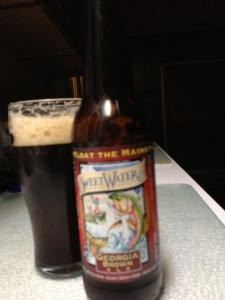 The most recent beers I had from the brewery were Georgia Brown and LowRYEder IPA. Billed an “easy drinkin’ back porch ale”, Georgia Brown is “as smooth as a Bill Clinton apology”. According to the bottle, I was to “enjoy it some southern hospitality” so it was a bottle I cracked open during a trip to visit the in-laws. There’s chocolate and demerara sugar (or as they call it down there, sugar in the raw) on the nose. It’s colour can be best described as a fine amber syrup. It’s got what you’d expect from a brown ale – low bitterness (30 IBUs and is hopped with Columbus & Willamette) and some bready characteristics. There are also bold coffee notes on the finish, though, to keep you guessing. 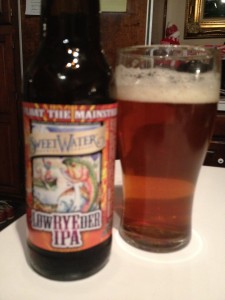 Next up is LowRYEder IPA, described as “a flame trowin’ IPA ignited by a 25% shot of rye malt and capped by a booty hoppin’ blast of Mt Hood and Centennial hops that make this IPA bounce”. Rye’s a common ingredient in beers across the South. It can be sourced easier than hops and can help give that desired spiciness. The beer pours orange with amber highlights topped by vibrant head of foam. The beer’s hopped with Columbus, Mt Hood and Centennial. Whilst there was initial fresh citrus notes on the noses, the rye bill (plenty of brewers find 10% rye creates the desired spicy backbone) resulted in an aroma of dried fruit. This beer’s balanced, though, and the dry, bitter finish is not over-powering. It belies its 6.2% abv and cries out for a good burger to have alongside it.