What does it take to strike a right balance between beer and other alcoholic products? Specialist beer bars are on the up and so too are places like vintage cocktail bars. The beer bar often has recognised the need to have a good whiskey selection for example. However, a recent visit to Dawson Street’s Peruke & Periwig shows that so-called “destination” bars have a long way to go. 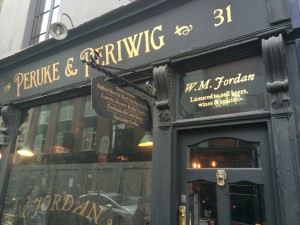 Perusing the spirit selection and extensive cocktail menu, one is struck by the attention to detail and the creative side to the business. The prices charged reflect this. Such places clearly want to be a top class drinking establishments. So why does this bar and others ignore their beer selection? Tell me it’s not based on the saying “beer and liquor makes you sicker“?

Want the place to ooze class and sophistication? Don’t ignore the beer offering. Meticulous attention is given to the spirits and other ingredients for cocktails. This is let down by a somewhat lazy approach to beer. A beer menu doesn’t have to run to a hundred different varieties.

Why don’t they adopt a similar approach to wine? Bars such as these often have a limited but somewhat better thought-out wine selection. If you want class why not have a Trappist beer or two? An IPA is popular amongst the fashionistas. How about a locally produced lager? A couple of well-thought out beers is all you need and continues that attention to detail that is afforded to other alcoholic offerings.

It’s the little things that can let a place down and not maximise the enjoyment for more patrons. Yes, they’re popular and generate substantial income from their core offerings. It wouldn’t take a significant effort to improve the beers. Advertising the likes of Murphy’s Red alongside the likes of Yellow Spot doesn’t exude sophistication. Top class hotels are also guilty of this approach. 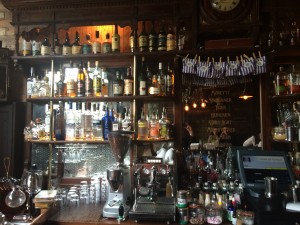 It’s time for these places to step up their beer game. They can even make a big thing over stocking craft beers. As I was leaving Peruke & Periwig I heard two people in there for an after-work beer and they were looking for a “cleansing ale” or a “small pint” of some variety. Bars like this can go to places that we resent by cashing in on the “in thing”. So why ignore good beer? Until then, I’ll stick with ordering a coffee.