Wow, what an election that proved to be over there in Britain.  I had an eerie feeling that it could prove to be ’92 all over again for Labour.  In certain areas it was even worse. While they retain control of every former mining area, they ‘lost’ Scotland. The SNP, the real surprising force, now occupies the third party spot, previously held by the Liberal Democrats in Westminster.  And with 56 out of a total of 59 seats, they are the undisputed party of Scotland.  Whereas UKIP and the Green Party received 15% of the popular vote, they only managed one MP each.  In an election full of surprises, few expected the Conservatives to win an outright majority. However, this could prove to be a pyrrhic victory. Without the Lib Dem crutch, they could find themselves at the mercy of their Eurosceptic wing.

Last month, I featured a piece on what the election could do for beer (British general election 2015: political pint scoring).  Now in its aftermath it is time to look at what is likely to happen.  The Queen’s Speech to parliament contained few bills that would have direct impact on the British beer industry. This is hardly surprising, as the Tories wish to remain silent on the issue of Minimum Unit Pricing, for the time being at least. It could be back on the agenda pending the outcome of the legal challenge to the Scottish equivalent.

In a move that will boost consumer demand generally but will spill over to beer, the Treasury will not increase income tax rates, VAT and national insurance before 2020 at the earliest (i.e. not before the next general election, providing it goes full-term). What is unknown is whether George Osbourne will reduce excise duty for a fourth consecutive time. There is a second 2015 budget scheduled for July 8. But this emergency budget is likely to focus on measures to reduce the deficit. We may have to wait until Budget 2016 before seeing any additional moves on excise.  Britain needs to address the legacy of the duty escalator, which caused excise to increase by 42% between 2008 and 2012.

The British political scene is marked by “buzzword” overkill.  This could be observed when the British monarch confirmed that her government will be doing the hokey cokey on the Brussels dancefloor in the lead up to an “in-out referendum” to be held by the end of 2017. Speculation is mounting that it is likely to be held sometime in the autumn of next year. Cameron won’t want this issue to completely dominate the national agenda and the longer it drags on, the less stable his government could be. The deal he will seek to do with Brussels will focus primarily on regulatory issues and possible opt-outs. These discussions and the subsequent referendum may attract a negative sentiment towards British imports across the EU, but this is likely to be over-stated.  What is likely to happen is that more sectors of the British economy will publicly acknowledge the importance of the EU for their business. The brewing industry could well be one of them. While its practitioners may not agree with all aspects of labelling regulation, a move on the origins, ingredients and ownership issues would be supported by the likes of the Campaign for Real Ale (CAMRA). So too would dealing with certain issues as part of the EU-US trade deal, the Trans-Atlantic Investment Partnership.

A new Enterprise Bill will be introduced to Parliament with the objective of cutting £10bn worth of red tape. We can expect to see plenty of bizarre regulations appearing over the coming months to illustrate the types of reforms that will be introduced, such as the removal of fines for “No Smoking” signs being the wrong size or in the wrong font. The main beneficiaries of this bill will be small businesses, which includes virtually all breweries in Britain. Business rates are to be reformed and a Small Business Conciliation Service will be introduced. This will be a low-cost mechanism for solving disputes (e.g. payments) and could bring benefits to the supply-chain dependent industry that is brewing. Energy costs are also likely to be addressed but as part of a separate bill.

Devolution is back on the agenda, with added powers promised for Scotland and Wales.  Expect to hear a lot about “metro regions” and the “northern powerhouse” (buzzword overkill?) as regional administration is reformed and new directly-elected mayors introduced. Pub goers can expect more integrated public transport across cities and not just London, apparently. Holyrood has recently agreed to commission a study into the tied-pub sector in Scotland to provide evidence on what changes need to occur. However, it remains to be seen whether any changes can be introduced ahead of next year’s Scottish parliamentary elections.

CAMRA ran an effective campaign in the run-up to the general election and sought pledges from candidates to “support well-run community pubs”, “promote Britain’s 1,300 breweries” and “represent pub goers and beer drinkers”. Over 10,000 of its members contacted their local candidates to support these issues. The organisation received pledges from 1,162 candidates, of whom 211 were returned to Parliament. This means 32.5% of the MPs in Westminster have committed to supporting the beer industry. As the table below shows, this support is spread right across the board, with less than a third of the ruling Conservative Party pledging their commitment to beer. Oddly, UKIP’s sole MP, Douglas Carswell didn’t sign up to the campaign. This is in spite of UKIP incorporating these priorities in its manifesto, along with other issues close to CAMRA’s heart. Perhaps he had enough of Nigel Farage’s endless “pint-ops” for Britain? 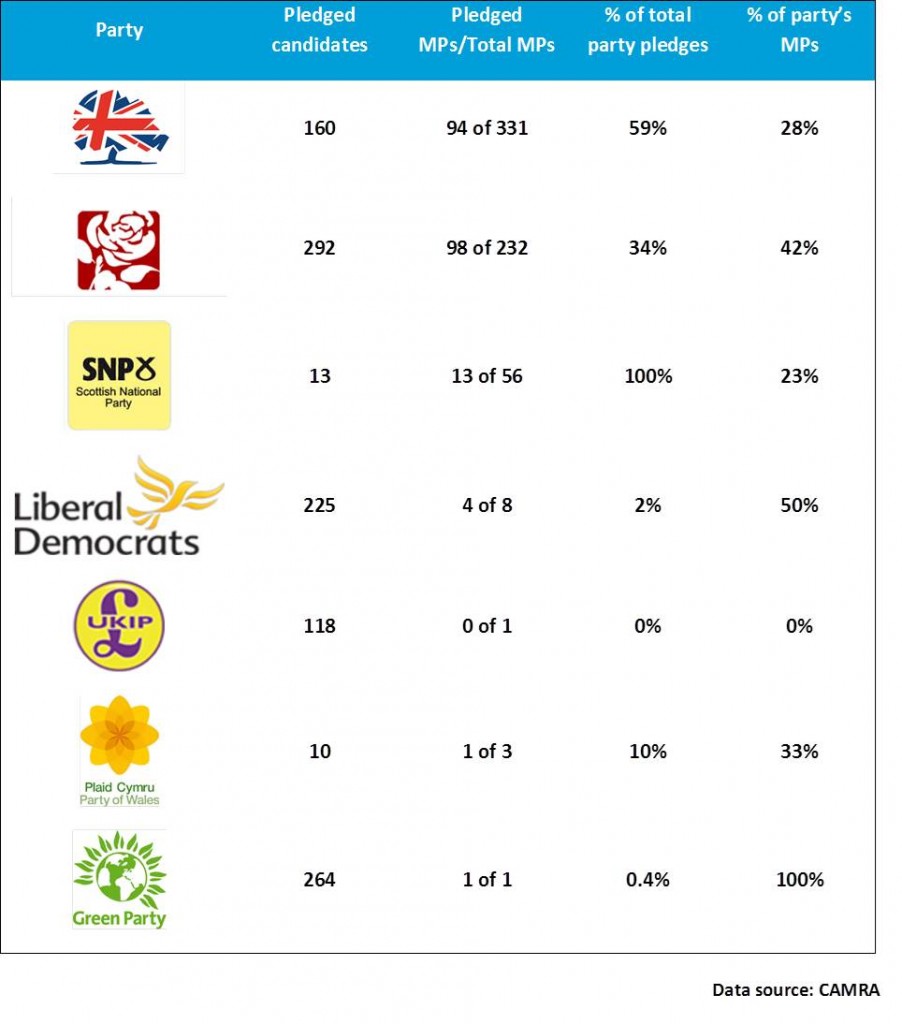 But it’s early days and naturally it’s difficult to predict with any great certainty what the political landscape will look like next year let alone in five years’ time. What will happen to the likes of Nigel Farage? Will he finally be allowed to resign as UKIP’s leader? Obviously, alcohol will continue to be linked to health and crime policies by all parties. Regardless, I think “pint-ops” will be here to stay and the All-Party Parliamentary Beer Group will have some new faces.