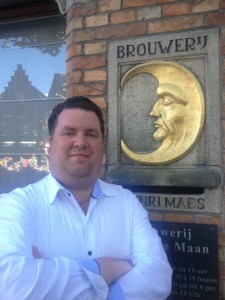 Accredited by the Beer Academy on 3rd April 2014, I was honoured to join the small group of Beer Sommeliers in Ireland (only five of us) and just over 50 in the world.

The Beer Sommelier qualification offers recognition of a significant depth of knowledge of beer styles and beer and food matching for successful candidates. Each Beer Sommelier acts as an ambassador with the knowledge, communication skills and, most importantly, the passion to inspire people to discover

Travel allowed Aidan Sweeney to really develop his appreciation and knowledge of beer. Aidan has been running public and private beer tastings in Dublin for the past 3 years. Described as a “beer brain”, a particular passion is introducing beers to new audiences and his beer tastings are occasions to discover beer and not to feel intimidated about asking questions or sharing comments. As a beer advocate, he feels this is extremely important for raising beer’s profile as a beverage to be celebrated like wine or whiskey. He is passionate about expanding the consumer base for well-made beer, especially in the flourishing Irish beer scene and is a member of the consumer groups Beoir and CAMRA. He has provided advice and insights to businesses in the retail and brewing sectors. More generally, as a public affairs executive, he specialises in areas of enterprise policy, with a focus on encouraging start-ups

The Beer Academy is the leading educational body dedicated to helping people understand, appreciate and enjoy beer sensibly. Founded in 2003 by a small group of beer enthusiasts, it quickly attracted support from brewers (large and small), beer retailers, trade associations and consumer groups who funded the start-up costs and enabled the Academy to put together a series of courses and training materials delivered by a small group of experienced and knowledgeable tutors with a real passion for beer!

Find out more about the courses on offer here