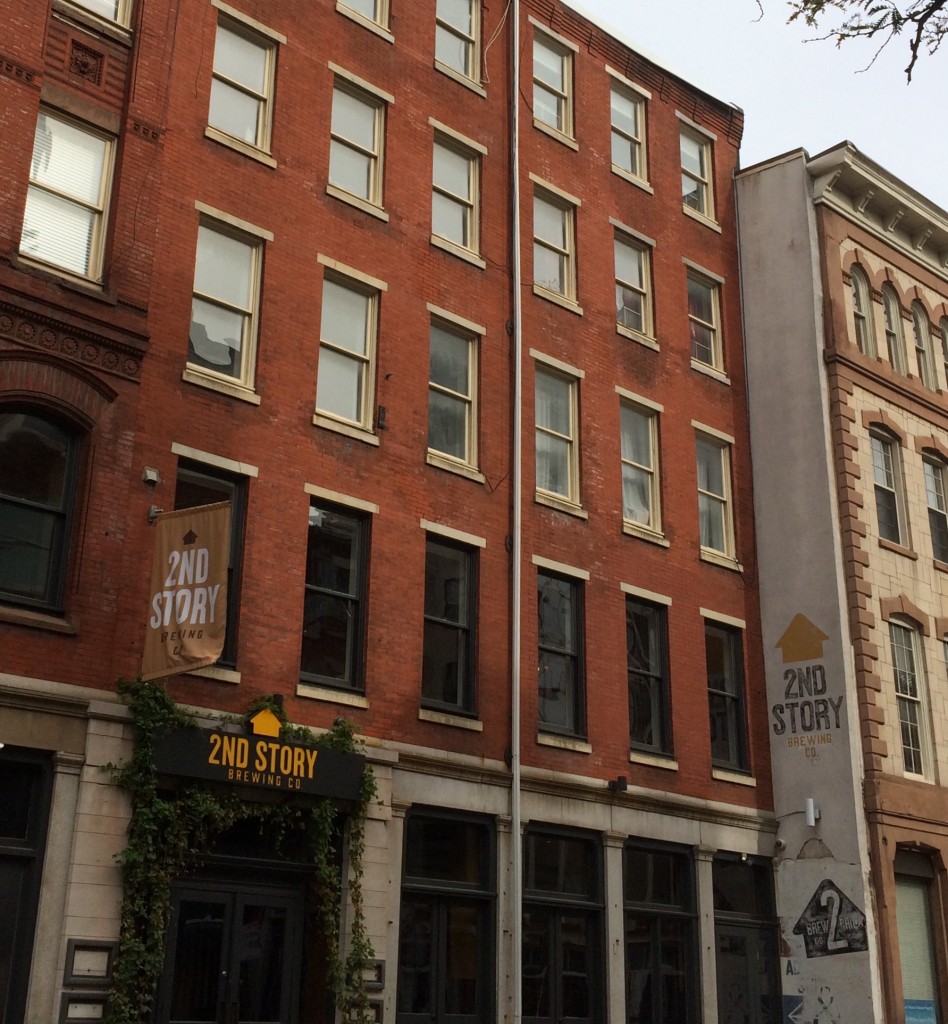 Philadelphia is a great city to get out and explore. 24 hours isn’t nearly enough time to take it all in. Yards Brewing is close to downtown. However, if you’re stuck for time, for example if you’re skipping out of a conference or simply balancing beer and site-seeing, there’s a brew pub even closer than you think.

2nd Story Brewing Company is only three blocks south of Independence Hall on Chestnut St. The origin of its name is simple enough – there’s a 15 BBL system on the 2nd floor. There’s seating in upstairs so drinkers can oversee the brewing side. It’s bright and airy. The ground floor has far more seating but is fairly dark, like so many American bars.

Having spent the morning in the National Constitution Center (I’m a politics nerd, not just a beer one), I felt I deserved a beer. I didn’t have long before heading to Washington, DC so I opted for a flight. The beers rotate fairly frequently so of those I describe below, it is more than likely only Five Mile will be on when you visit – it is one of their two standard brews. Expect some of the other beers to return at both the brewer’s and seasons’ discretion. My choice was heavily influenced by the recommendations of the bar staff.

First off was Berliner Weisse (3.6% abv), which poured a wonderfully refreshing-looking light gold. It was almost perfectly clear. There was a touch of fruit and wheat bread on the nose. Tart but creamy also. There were hints of apples and lemon in the flavour profile continuing into a very pleasant dry, lemon finish. When this beer is pouring, you can avail of syrups to blend with it should you wish,

Next up was Thrills & Pils, a 4.5% abv German pilsner hopped with Hallertauer Blanc and Jarrylo. It poured slightly hazy, yellow straw. The aroma was a blend of grass, herbs and mango. It drinks fruity at first before a good dose of bitterness kicks in. There’s an intense herbal finish to this beer.

Evolve – VII is a Double IPA (7.7% abv) hopped with Hallertauer Blanc, Jarrylo and Hull Melon. It’s hazy, light orange in appearance and there’s a bright, floral character to the aroma. At first, it is sweet, floral and pleasant for a DIPA. Then, everything changes. The “D” could equally stand for deceptive. Bitterness descends and lingers warmly into the finish.

As I mentioned above, Five Mile, an English Mild (3.7% abv) is one of their two standard brews. Fritzie’s Lager (4.9% abv), a Vienna red being the other. I suppose being a brew pub, it’s important that your house beers are session-friendly and similar to Yards,  they are traditional styles tapping into to the historic city. Five Mile’s a ruby mild with hints of chocolate and dark mahogany in its appearance. Toffee, chocolate and hints of coffee all feature on the nose. Its flavour is not too far from a hazelnut macchiato. It finishes smooth, creamy and nutty. Think coffee cake in a glass.

I couldn’t leave the place without trying a beer that was brewed to commemorate Pope Francis’ visit to the city a few weeks earlier. It was simply called Pope Beer. It was straw-like in colour with plenty of esters and clove on the nose. It was fairly-well carbonated which helped balance the sweet and spicy flavours of this beer. I have my suspicions that this beer might’ve have been their Pater Noster, a 4.9% patersbier, simply rebadged. Either way, it wasn’t bad.

It should be noted that Belgian beers are celebrated in the City of Brotherly Love. From what I saw in Yards and 2nd Story Brewing, local brewers are happy to produce their own versions. There’s more than a few serious Belgian beer bars in the city. Monk’s Café is far and away the best. It has a serious tap and bottle list. Sadly, a late night visit wasn’t conducive to photography – I’m sure you’ll understand. Anyway, you’ll encounter other Belgian bars too when your wandering around the city.