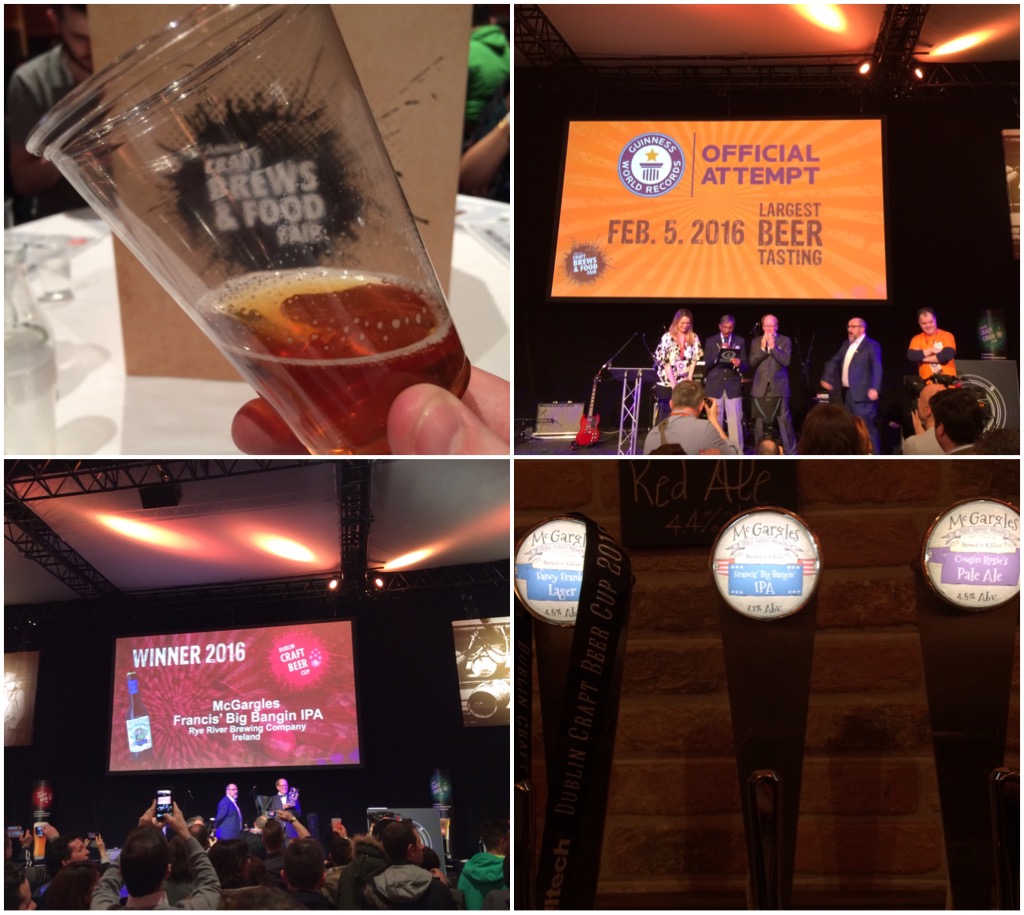 I was asked by the fantastic folks at Alltech to put together the following post for their Alltech Craft Brews and Food Fair blog on becoming a beer sommelier. You can visit the festival blog here

Some people can be incredibly difficult to buy presents for. Getting an idea of what they want can be akin to pulling teeth. I myself am guilty of such elusiveness. This causes problems for friends and family alike. They know I’m into beer: so bottles, cans, books, t-shirts and even brewery tours are common presents. Thankfully, the range and quality of beer gifts available improves year on year. However, the best gift I received was a voucher for a two-day course with the Beer Academy, yes there is such a place. This was the beginning of my journey towards becoming an accredited beer sommelier, and yes there is such a thing.

I don’t work for a brewery nor do I distribute beer, so the opportunity to learn alongside those that do was a fantastic experience. I took two years to complete the training. There are two compulsory elements before the final exam. It’s a fairly lengthy interview but there’s beer involved, lots of it. It may sound daunting but you’ll surprise yourself in how well you can taste beers blind and talk about them. Whilst the training can be completed faster, I wanted to really develop my knowledge of beer, through running tastings, hosting beer and food matching sessions and judging beer competitions. The certificates issued at each stage of training are cherished more than any academic accomplishment of mine. They also give you a badge too, which can make up for failing to get one from Blue Peter.

I know that any time someone mentions training or study, it can sound off-putting. But, this involves beer. Think of the possibilities. It’s true that you may get an odd look every now and then when you’re caught reading a book about beer at 8 a.m. but just remember – you’re studying! It’s also a great excuse to go into a pub or off-licence to try one or two new beers in order to broaden your horizons. And it’s not like you don’t do this already. You’ll broaden your knowledge of beer and food pairing, as well as cooking with beer – either enjoying a glass or two, á la the late-great Keith Floyd or adding beer to the recipe or possibly even both.

The snobbishness towards beer has lessened in recent years. It’s no longer just wine and whiskey. Increasingly beer is being recognised for its localism, and the sheer diversity of the different styles on offer. There are now 100 craft breweries on the island of Ireland and over 10,000 worldwide. It wasn’t that long ago that it was difficult to get a New Zealand Sauvignon Blanc in this country, but now you can easily buy beers from there too. Similarly, the offerings from California/Washington/Oregon outnumber the types of wine available from these regions. Know a whiskey drinker? Well there are barrel-aged beers which emphasise different nuances of whiskey-styles; of course Kentucky Bourbon Barrel ale is one of the best-known and popular examples.

Education can improve and round out one’s knowledge of any subject. Learning about beer is mostly trial and error. The education part helps gives you new tools and approaches to appreciating and evaluating beer. There’s a reason why your beer may look, taste or smell like that. It’s important that those in the trade up their knowledge of beer. While this is happening, it’s happening slowly. And it shouldn’t stop there. There’s room for consumers to develop their beer knowledge. Craft beer recommendations are often spread by word-of-mouth, through social media and blogs. It’s important that people get to know the beers they like, why they like them and just importantly if a beer could be “off” due to a brewing hiccup or a fault with the bottle or tap.The added bonus from doing an accredited training course is that you get to judge serious beer competitions. It’s important for the brewers that they have their beers judged to common criteria by people trained in how to assess them. I was invited to judge the Dublin Craft Beer Cup in 2015 and tried approximately 140 beers over two days. Beer judging can be a wonderful test of endurance. You’re writing detailed notes and scoring each beer. It’s hard work but also you get to meet great people.Tasting and judging beers are only part of the story. There are opportunities to meet brewers, visit their breweries and try their latest releases, some before they go on sale. You can use the accreditation as much or as little as you want. I’ve recently returned from visiting 20 breweries in the U.S. over a ten day period. You can expect to be invited to judge beer competitions overseas and to attend international beer festivals. I’ve even received invitations to attend a couple of hop and grain harvests.

Becoming an accredited beer sommelier should be just a start. There is almost no end to the beers out there. This year alone, I’d say the number of beers I’ve tried is in the high hundreds. I keep a running total through the notes I keep and photos taken. There’s always a beer festival on the horizon, like the Alltech Craft Brews and Food Fair, so tickets to these can become a present for the craft beer enthusiast too.

With the publication of last week’s report of the Sean O’Sullivan-chaired Entrepreneurship Forum the second annual Alltech International Craft Brews & Food Fair (6-8 February in the Convention Centre Dublin) couldn’t come at a better time. Last July’s event featured an enterprise pillar because let’s face it Ireland needs to do more in terms of new business start-ups. Renewed attention is being put on getting growth back into the domestic economy and craft beer is clearly bucking the trend.

A key focus of this year’s event will be on supporting and expanding an essential part of the craft beer industry – the pub trade. A dedicated conference will be held over a day and half discussing measures at reinvigorating the sector, principally through craft beer and ultimately greater choice for the consumer. We have seen a lot of media attention given to the pub trade, which has not just focused on closures but also on those that are turning around distressed pubs, new high profile entrants to the market such as Wetherspoons and those hoping to redefine the distribution business to pubs through a dedicated craft beer focus. Given the importance of pubs to communities and the part they play in our overall tourist offering, it is heartening to see that approximately 300 pubs have registered to attend. Changing the model for the Irish pub through an expanded beer range, quality Irish food or for the more ambitious, prepared to brew onsite will further reinforce the overall Irish craft beer industry.

The mainstay of the event will be “Craft Brews and Food Fair” itself featuring over 50 breweries from around the world paired with 15 of Ireland’s finest artisan food producers. It will be open to the public on the Friday (5pm-9pm) and Saturday (12pm-9pm), as well as there being set trade sessions during the event. Tickets are €15, which include four free drinks and there will be lots of food to sample as well. They can be purchased on the door or in advance here.

There will be a number of sensory sessions throughout the fair in which participants will get the opportunity to learn about tasting beers, matching beer to food, whiskey and gin tastings, as well as of course learning more about Alltech’s very own Kentucky beers from head brewer Ken Lee. For those more enthusiastic, Tim O’Rourke will be back and along with a panel of beer experts will be running a separate day-long Alltech Academy Sensory Class on 6 February with the opportunity to take an exam to become an “Alltech Certified Beer Taster”. This course has to be booked separately here.

It will be interesting to see the beers that will be on offer during the fair. I’m looking forward to trying beers from new Irish breweries such as N17, Independent Brewing Co and Rascals Brewery. Also, the fair will feature a number of international breweries (such as Coisbo Beer from Denmark) that soon could be featuring on shelves of off licences or on draft around the country. Last year, attendees had the good fortune of encountering Hardknott’s Queboid and Beavertown’s Gamma Ray. Hardknott have an excellent array of beers on sale in Ireland and Beavertown thankfully are due here momentarily.

The Dublin Craft Beer Cup will be awarded for a second time, with the trophy making the short trip down the M1 from Lisburn, home of Hilden Brewery. The inaugural winner was of course Twisted Hop. The number of entries in the Dublin Beer Cup 2014 is expected to be 200 beers from at least 100 breweries in 16 countries, which goes to show that there’s prestige to being successful in such competitions and there’s a real opportunity to establish this as one of the premier competitions out there. The calibre of the beer entered last year was exceptional so it will be interesting to see the full list of entrants and the medal winners at the conference. Judging is expected to get underway on Tuesday 4 February with the winner being announced at lunchtime on Saturday.

Thinking back, it was at July’s event that I met Sam Black of Kinsale craft brewing fame and the lads from Brú brewery, as well as hearing about plans for a new brewery in Wicklow. I wonder by the time the third incarnation of this event comes around not only what the brewing landscape will look like but also what changes pubs will make on foot of what they will discover next week. All anyone will have to do is to heed Dr. Pearse Ryan’s three-day pep talk.