Sadly, I’m not in Philadelphia this week for the Craft Brewers Conference and BrewExpo America®. Fortunately, I was able to visit the city last autumn. Ten years has passed since my one and only visit to the city. Regeneration has played a key role in its revival and it has become a good stop on one’s beer travels. I had less than 24 hours to take in a couple of beer destinations and see some of the sites.

Yards Brewing, now in its 22nd year, is in easy reach of downtown. It is one of those breweries that suffer unfairly from being one of the early movers on the craft beer scene. Familiarity can count against you in the craft beer movement, even one that holds “traditional” as key tenet. 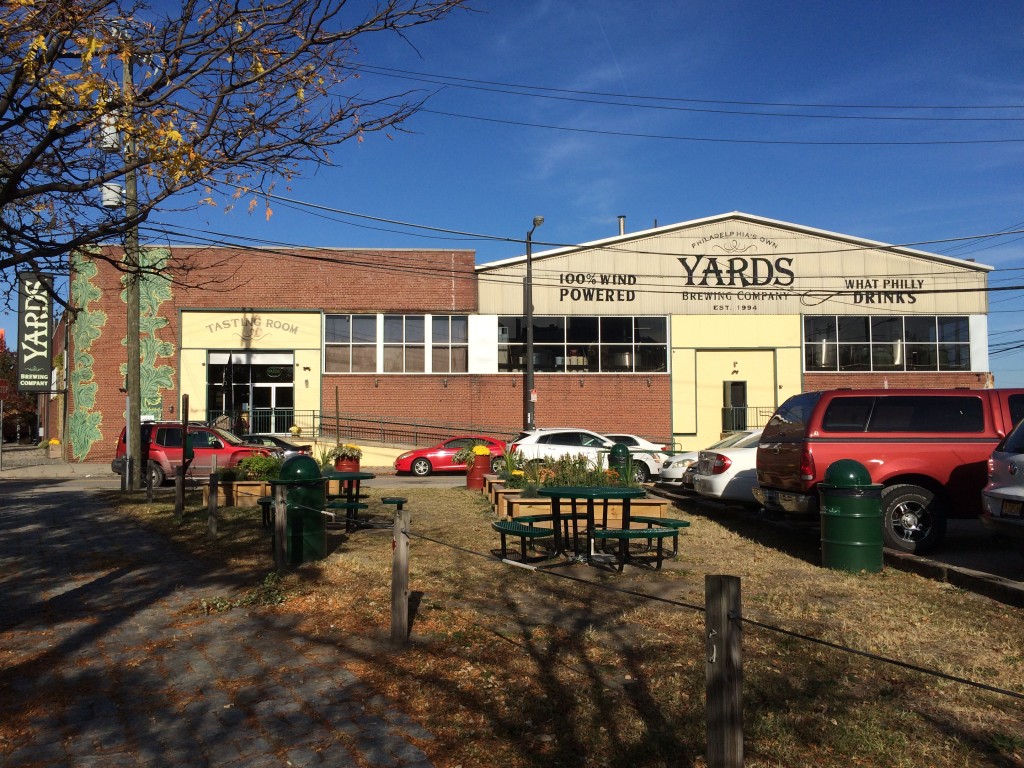 It’s a short walk from the Spring Garden metro stop. The first hundred yards or so is a tiny bit sketchy but the entire area is up and coming. You’ll see just how far it’s come on when you get to North Delaware Avenue, with the condo developments. This used to be the nightclub area of the city but with close proximity to the river front, land prices are going through the roof.  The vacant lots won’t be there for much longer. This part of the city has one added benefit. It comes complete with the smell of wort emanating from the brewery.

Yards Brewery focuses on traditional beer styles but they can have a twist. The branding, like its beers, reflect traditional British ales, a likely a nod to the revolutionary routes of the city. It also doesn’t hurt to compete with the British imports like Sam Smiths. The brewery operates Monday to Friday before opening up for tours on the weekends (12-4). Apparently people line up before it opens but they run every 20-25 minutes. Oh and it’s free! 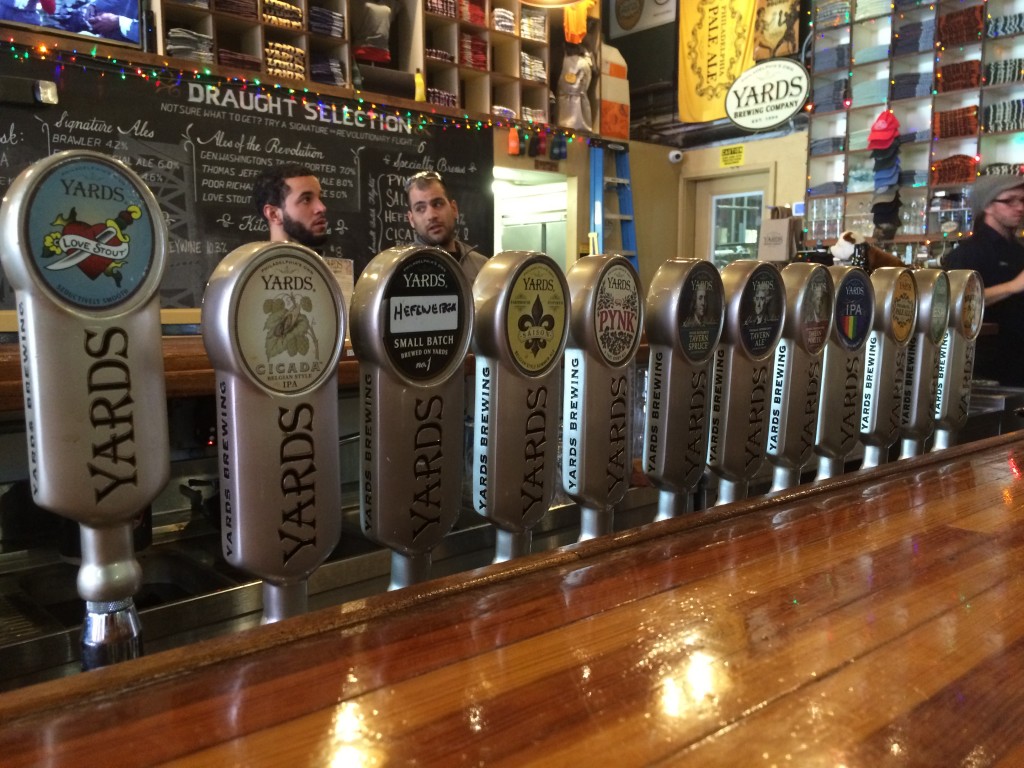 It’s worth visiting due to a good tap room and getting to meet the regulars, many of whom drop in on their way home from work. The tap room offers a window into the brewery so you don’t have to be there on a Saturday to get a view of the operations. Of course, visiting brewers and beer tickers stop by.  A group from nearby Conshohocken Brewing were in visiting. The tap room’s a great place to chat to the brewery staff. They can be found enjoying a post work pint at the bar but at times ducking back into the brewery to check up on things. Work never stops.

First, up was Brawler a 4.2% abv English Mild. It was rich mahogany in colour with excellent clarity. As you’d expect the aroma was malty with slight coffee and nutty aroma. As a session beer, it was smooth and almost milky in mouthfeel. Toasty with a hint of caramel roasted nuts in the finish. Next was the Extra Special Ale (6% abv). Its appearance captured the colours of Philly and Pennsylvania perfectly – copper and chestnut. Think Liberty Bell & rusting factories. I’m partial to an ESB and this beer is interesting. There’s a lot going on. Spicy, nutty, dark chocolate flavours complete with a slight, citrus bitter bite. It has a big finish building intensity of the bitter malt. I would love to try this on cask but sadly they didn’t have it on when I was visiting.

Of course, the brewery’s pale ale and IPA offering is part of the signature flight. Philadelphia Pale Ale (4.6% abv) pours an incredibly clear golden colour. The aroma is of freshly squeezed oranges, thanks to being dry-hopped with simcoe. It’s certainly easy drinking with notes of fresh tangerines in the flavour. It’s reminiscent of orange squash with a pleasant dry, bitter finish. The IPA is called IPA because let’s face it, why bother coming up with a name for it because it’s a beer style that people just ask by style rather than name. At 7% abv it falls outside the session beer category. The colour is polished brass with orange on the nose. The fruit flavours continue with a sherbet-like mouthfeel at first before being hit by a big, bitter punch. There’s a sticky sweetness and pine notes in the finish. It’s hopped with chinook and amarillo.

Of course, you’re bound to take in some of the historical sites when in the city. If you’re not in the mood to actually venture into Independence Hall, you can smooth you conscience somewhat by trying beers inspired by three founding fathers as part of the brewery’s Revolutionary Flight. These beers are inspired by historic recipes of Washington, Jefferson and Franklin.

General Washington’s Tavern Porter (7% abv) has an aroma of roast coffee and beef. It’s smooth with a smoky body before a big dark chocolate and caramel finish. There’s also a bourbon barrel-aged version, which I have yet to try. Thomas Jefferson’s Tavern Ale on the other hand is a strong golden ale (8% abv). It pours a clear, copper colour. The aroma is of lightly toasted wheat, red fruit and spice on the nose. The flavour and finish is of spice and honey.

Poor Richards Tavern Spruce (5% abv) is apparently based on a recipe of Benjamin Franklin. Billed as a historical style, it’s brewed with molasses and local blue spruce tips. Amber in colour, there’s ginger and vinous notes on the nose. The flavour and finish is of ginger and pine; a really interesting beer. The final beer of the flight is Love Stout (5.5%) named for the City of Brotherly Love. A nitro pour, it’s almost jet black topped by a creamy head. The aroma is of powdered milk chocolate. It’s creamy, with a coffee hit in the finish.  I understand there’s a variant of this beer containing 100% cacao Belgian dark chocolate.

The final flight consisted of four refreshing seasonal and small batch brews. Beginning with Hefeweizen (5.4% abv). It was 24ct gold in colour, if it was any clearer the guys on TV’s Gold Rush may finally retire. There was plenty of banana and clove on the nose. At first it comes across as a tad over-carbonated, leaving it too dry. It finishes in the opposite direction, however, with sweet banana flavours lingering long after. Saison (6.5% abv) also pours a lovely, polished gold. There’s banana, clove along with other saison yeast notes. It’s sweet, cereal with lemon and honey blending into a pleasant finish. There’s a dash of pepper and bitterness too.

Yards, like other breweries, are keen on giving back. They are passionate about supporting charities and what better way than through brewing beer. You should check out their Brew Unto Others initiative. Part of the proceeds from PYNK (5.5% abv), a tart berry ale, goes to support breast cancer research and awareness. This is a pink beer, no doubt about it. What’s better is that the colour is natural thanks to the cherries and raspberries. It’s none of that artificial colouring for green beer. It’s amber with a big splash of pink. For the aroma, think raspberry yoghurt. Upfront, there’s pleasant fresh sour cherry in the flavour before a brut, dry finish. The palate isn’t overpowered by the tartness.

The last beer of the flight was Cicada, a Belgian-style IPA brewed with local honey (8.5% abv). This bronze ale had a big Juicy Fruit aroma. It was hard to pick up the Belgian yeast aromatics; only the slightest banana esters could be detected. Drinks bitter at first, then floral and honey notes take over. There’s a warming bitter tropical fruit and herbal bitterness in the finish. 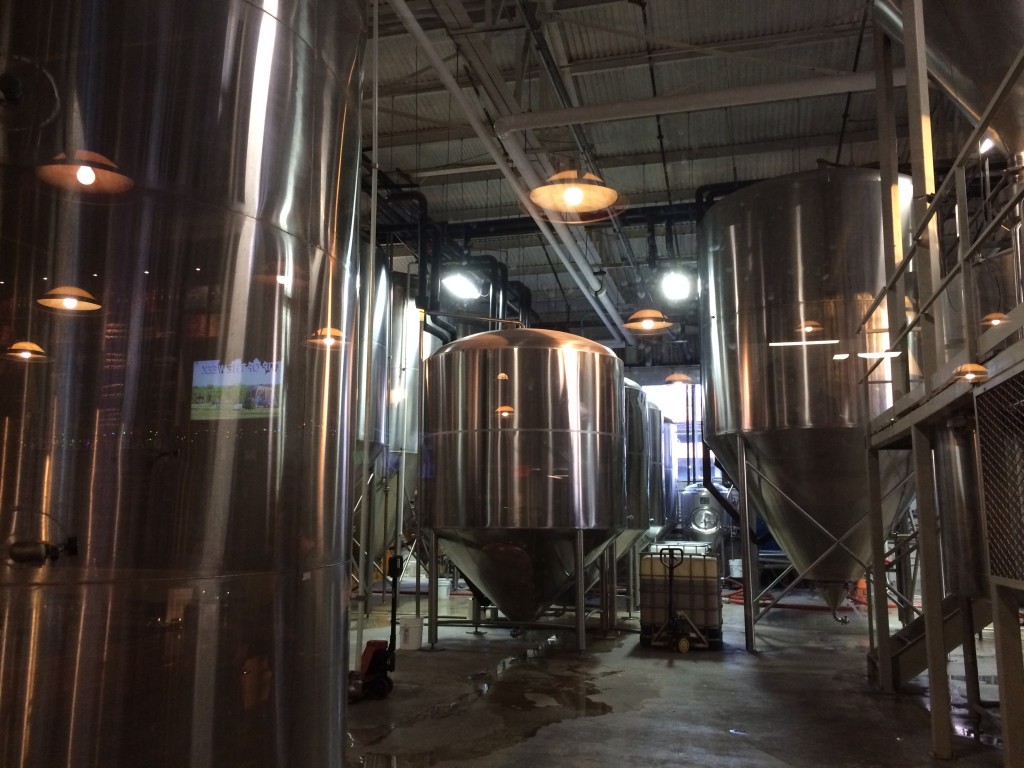 I couldn’t leave the brewery without trying Olde Bartholomew Barleywine (10.3% abv) on cask. It pours lovely, clear amber. The aroma is a wonderful medley of marzipan and grapes. It’s not overly sweet, one might say medium-dry. The flavour is penetrated by pleasant hints of fruit. It finishes dry and spicy.

I had only planned to stay an hour or so in the taproom but I was there far longer than that. As I mentioned before, the taproom has a real “local bar” vibe to it. It’s a friendly place, whether you’re from the city or just passing through. And of course, the beer is good.