Two weeks ago I headed to Belfast for the final of the Guinness Pro12. I hitched a lift with the Munster Rugby Supporters Club, who ran 3 coaches from Dublin. The day before, we were warned of Section 40 of Justice Act (Northern Ireland) 2011. It states that “a person who knowingly causes or permits intoxicating liquor to be carried on a vehicle to which this section applies is guilty of an offence”. Apparently the fine if caught is £600. It was to be a largely dry outing – ironically through the pouring rain – and given the eventual result the Munster fans were in dire need of a pint.  Inside the Kingspan Stadium (or Ravenhill to those that can remember as far back as 2013) Guinness and Harp were the two beers available.  However rubbing some salt in the wounds, there was no cash machine near or indeed inside the stadium.

There may be good reasons for prohibiting alcohol on coaches in the North. I can only imagine the spirited hijinks that some supporters, let’s take Glasgow as a completely random example, may cause. That is the government’s prerogative. However, I personally have a problem with banning alcohol on coaches originating in a different jurisdiction. Surely it’s inhibiting our freedom of movement?  Germany recently had to relent in its attempt to apply its minimum wage to truckers passing through from elsewhere. I understand that alcohol is a controlled substance and enjoys certain general exemptions but nevertheless its being effectively prohibited took away from many fans’ enjoyment of the day out.

As a Leinster fan, I couldn’t bring myself to wear red but I would’ve been more than happy for Munster to win. Having said that Glasgow have been unlucky not to enjoy more success over the past two seasons. They were though, deserved winners on the day. And how did I demonstrate my support for Munster? How else but to enjoy a pint of Mahon Falls by Dungarvan Brewing Company? 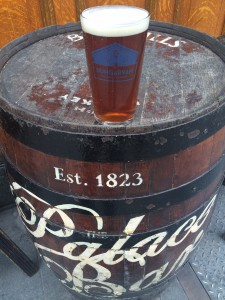 It couldn’t be more fitting. The bus was departing from Westmoreland Street, just around the corner from the Palace Bar. Yes, it has an iconic whiskey selection but it also has one cask pump, alongside some draught craft offerings. The Waterford brewery puts in a regular appearance thanks to Cormac O’Dwyer’s love of cask ale.

Mahon Falls is a rye, pale ale that has developed over the years. I first tried this at the 2012 Irish Craft Beer and Cider Festival when it was billed simply as a Rye PA.  But simple it wasn’t.  I’ve sampled it (cos i’m a massive alkie) several times over the past few years, mostly in bottles and it has since become more refined. The first bottles released in spring 2013 finished extremely dry. They certainly had plenty of oomph to stand up to a curry. 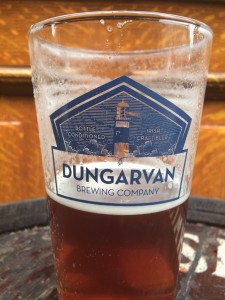 So what does the 2015 cask version taste like? It still has aromatic spicy notes on the nose, this beer’s all about spice and that can be seen throughout the flavour which pleasantly cuts through the creaminess of a cask pulled pint. Of course, the rye’s influence is not lost in any way. It’s more expertly in line with an unctuous rye bread rather than merely being used to dry out the palate.

It was a beer that sent me happily on my way to Belfast. The spicy notes remain long, long after the beer’s disappeared. And I should know, as many an hour passed before I got to have another beer.