The Irish Beer & Whiskey Fest kicked off yesterday and for five days I’ll be referring to the RDS as a second home. It would be rude not to when it’s taking place practically around the corner.

This festival marks the evolution of the Irish beer festival that took place around St Patrick’s Day in the IFSC over the past few years. However, those festivals were more of a large craft beer bar where breweries sent kegs rather than be present themselves. 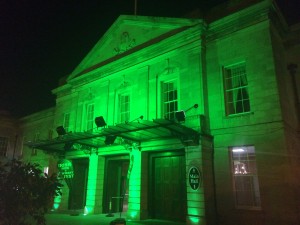 It’s by the organisers of the excellent Irish Craft Beer and Cider festival that takes in the RDS every September. This time it takes place in the Main Hall, a space that’s considerably bigger than the Industries Hall. The Main Hall may bring back memories for some of participating in the Young Scientist Exhibition (even as far back as when Aer Lingus used to sponsor it).

Whiskey always had a place in the September edition but it has gained more prominent billing for this festival. 7 cider makers are also represented and the food offering is the biggest yet.

19 breweries are present. Yes, this is a drop in the number of stands when compared to the last two editions of September festival. However, it’s been a fairly packed calendar for beer events of late with the Alltech Craft Brews & Food just a fortnight ago. Brewers have had to choose what festivals to focus on, how much beer to have on hand to attend them etc. Don’t worry there’s plenty of good beer to be had at the festival. 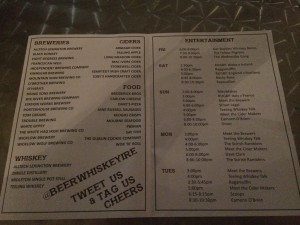 Some to look out for include Mountain Man’s Sneaky Owl; Searbh Rua (Imperial Sour Red) and Coffee Rocket by White Hag; Enigma and Polar Vortex from Eight Degrees; and Buck It by Black Donkey. There’s cask beers on offer too so be on the look out for O’Hara’s Leann Follain and three from Station Works (stout, blonde & brown). These are of course those that I tried on day 1 of the festival. There’s plenty of good beer on offer from Trouble Brewing, Independent Brewing, Alltech Lexington Brewing, Rye River (also pouring Innis & Gunn and Coisbo), Porterhouse, Franciscan Well, Rising Sons, O’Brother Brewing, White Gypsy, Wicklow Brewing and Wicklow Wolf.

So far it’s shaping up to be a great festival. The new hall has given it a more spacious feeling, somewhat reminiscent of the early years of the September’s festival. It’s €2.50 for a half pint though above 7% beers are served in thirds. Some stands will give you a pint but not in the official festival glass. If you want a pint, you’ll have to make do with plastic.

Hopefully you get the opportunity to drop in in this festival.

Forget the Electric Picnic, the festival to be at the end of the summer is the Irish Craft Beer and Cider Festival. Continuing in its early September slot in the RDS for the third year, this edition promises to be bigger and better.

The festival got a bump in attendees in 2012, thanks to the weather and benefitting from the first Leinster home match of the season (supporters could benefit from 50% reduction in admission on presentation of match ticket). Nonetheless the organisers are determined to give it a go. Tis year’s festival is now a four-day affair. Gone are the three-day passes but Beoir members can benefit from discounted entry. There is also greater equilibrium in the beer festival calendar as beer festival took place a couple of weeks before the inaugural festival in 2011 and last year it was the weekend immediately following last year’s one. I wasn’t particularly complaining because needless to say I attended both (gutted to have missed the Secret Beer Garden 2013 in its new May slot). 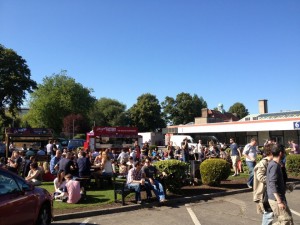 The festival had a quiet start in 2011 and as all regular festivals needed time to grow in its surroundings. Noticeable improvements in terms of general attendee experience could be seen last year. This includes TVs to watch the important matches of the weekend (i.e. Ireland v Sweden and the All Ireland final) as well as the main stage being in the centre of the room as opposed to be at the end of the hall this first year. However, the key reason for being there is to enjoy the range of beers and ciders on offer and thankfully the opening hours have been revisited (Thursday 5pm-11.30pm, Friday & Saturday 12pm-12.30am, and Sunday 12pm-8pm). The later closing times are fantastic, particularly those who might be combining it with the football match nearby on Friday.

The festival allows attendees to get up close and personal with the breweries themselves. Unlike the in the IFSC, breweries operate stalls offering their wares. There are a number of first time debutants such as Donegal Brewing Co., Kinnegar, Kinsale Craft Brewing, Mountain Man, Five Lamps and newly launched Brú Brewing from Meath. It’s great to see Galway Hooker back at the festival after missing last year’s, bringing with them a range of beers that are nigh on impossible to imbibe outside of city of the tribes. J.W. Sweetman will be there under their new name, ownership and brewing skills. In 2011, my beer of the festival was Barrelhead contract brewed by Fransican Well for the guys behind Sweetman’s today and I can’t wait to try it once more. 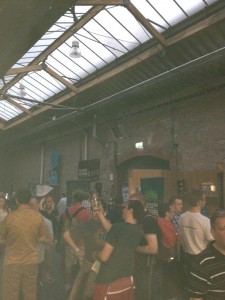 Besides the array of fantastic stouts and porters, there will be a number of golden, pale, brown and amber ales. I am particularly looking forward to trying the range from Kinnegar (they were excellent when tried in bottles last June), Mountain Man’s Hairy Goat and Kinsale’s Pale Ale complete with hop randall in tow. Hopheads wont be disappointed this year with the Eight Degrees “hop off” contenders Cyclone and Hurricane putting in appearance, as well as Amber Ella made with the with aussie hop of the same name (used to be called stella but for some reason had to be changed). It will be interesting to get the opportunity to try the Franciscan Well’s IPA as well as Whitewater’s Hoppelhammer IPA because I’ve heard good things about the cask version.

Like all beer festivals, there will be a range of “special” brews. It’s great getting the opportunity to have first tastes of brews that may or not be put into wider production or based on feedback relieved they might be altered in future brews. Dungarvan will be bringing brews that will offer an insight into Cormac’s thinking of forthcoming brews. In 2011, they brought what was to become Comeragh Challenger and last year we got to try Mahon Falls then under thr imaginative name of Rye-PA. Alternatively festival specials might be brewed with unique adjuncts because of either the growing popularity of these beers or simply for the craic. The Metalman crew have done this in the past. This year we’ll see O’Hara’s Curim with peach as well as with mango and honey. Whitewater will be bringing Bee’s Endeavour, an ale with honey and root ginger. Let’s not forget that Trouble Brewing will once more be providing a scaled up version of the brew that scooped overall prize at the 2013 All Ireland Homebrew Competition, an oatmeal stout called Ormeau Dark. There will be also two collaboration brews at the festival the first being Troubled Hooker (can you guess the breweries involved?) the second one will be a Belgian-dubbel style from JW Sweetmans and O’Hara’s. Hopefully White Gypsy will be bring theirs and a side-by-side test could be done. There will be a noticeable increase in abv of the beers and offer and the accolade for the strongest on offer goes to the Porterhouse’s Louder. O’Hara’s will also have a barley wine. That’s two Irish barley wines at the same festival. Two! There were none last year. 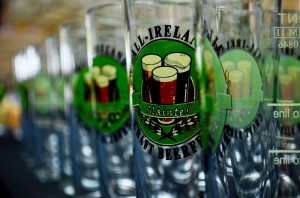 For lager drinkers (much maligned by beer aficionados), there will be more choice over previous years. No longer will Dingle’s Tom Creans, Carrig lager and a couple from the Porterhouse. Brú will bring both a German-style pilsner and a Dortmunder, and people can get their malty lager fix from the Five Lamps. O’Hara’s bar will feature their Helles interpretation. The festival will show that lagers are not solely pale yellow thirst-quenchers and there is quite some depth to the cold fermented brews. Look to the amber lagers on offer from Whitewater’s Bullrush (no Belfast Lager this year) and the excellent sorachi ace-infused Sahara from Metalman. For those attending the festival with lager drinkers, why not introduce them to the range of Kölsch and other golden ales as a transition beer?

Finally, a lot of discussion has taken place online about the presence of Franciscan Well at the “craft” beer festival following their takeover by Molson Coors. For example, its beers have already been removed from the Beoir Finder app. This is an issue that will run and run until there’s an agreed definition for “craft” beer in an Irish context (or do we need one?). Alex aka @TheBeermack has a good overview of the debate on the presence of the Cork brewery at the festival and suggests that the festival might look at future years branding itself as “The Great Irish Beer and Cider Festival”. This would be inline with both its counterparts in the UK and the US where independent and large breweries participate and leave it to attendees to make up their minds. Although in the case of the Great British Beer Festival (GBBF) with its focus on real ale, you wont see the likes of Brewdog, Kernel or Magic Rock participating. People will “nit-pick” until this issue is sorted but others may equally take umbrage over the presence of international offerings from Kentucky and Sierra Nevada at an “Irish” festival. There were rumblings at the GBBF over the increased presence of international beers and that they were taking attention away from the indigenous offerings. I certainly think it would be great to have additional beers from overseas at the festival because it could help boost international visitors to the festival (CAMRA and other EBCU-affiliated members get discounted admissions). Perhaps one year we may see Irish brewer’s Fergus Fitzgerald (Adnams) and Evin O’Riordain (Kernel) bring their brews to the festival. Sadly it was a missed opportunity this year during “The Gathering”.

All in all it promises to be a fantastic weekend in store for attendees. Apparently there will be ciders and whiskey as well but they’re really not my thing (at the moment) and perhaps an education will be required so if any one out there has the patience to teach me about them, get in touch.