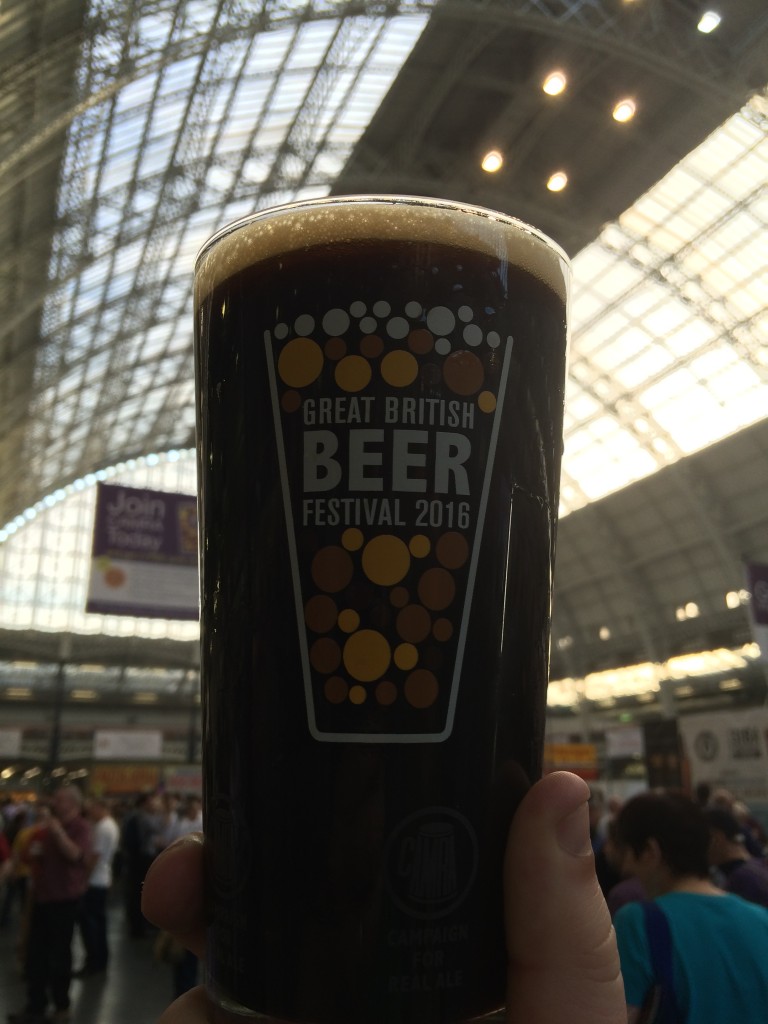 Last week, the Great British Beer Festival (GBBF) was held in London’s Kensington Olympia. This was my fifth consecutive GBBF. It’s not quite the exploits of Michael Phelps and Steve Redgrave but it still makes me smile. It has become firmly an annual jaunt over to London.

GBBF 2016 had a slightly different feel to it over previous years. It seemed as there were one or two fewer brewery bars. Some big brewers like Shephard Neame relegated its sole beer (Spitfire) at the festival to a shared bar, which in the grand scheme of things is no big loss. The festival certainly had a more corporate feel to it, if by corporate one means organised.  It felt more spacious than previous years. This is more space on top of what is already the cavernous environment that is the Kensington Olympia venue. There was a big push by CAMRA to sign up new members. Some had the air of chuggers about them, keen to push the £20 Wetherspoon vouchers above all else. Corporate hospitality featured also with groups given guided tours, tastings etc. This is becoming the norm it seems at large festivals these days. 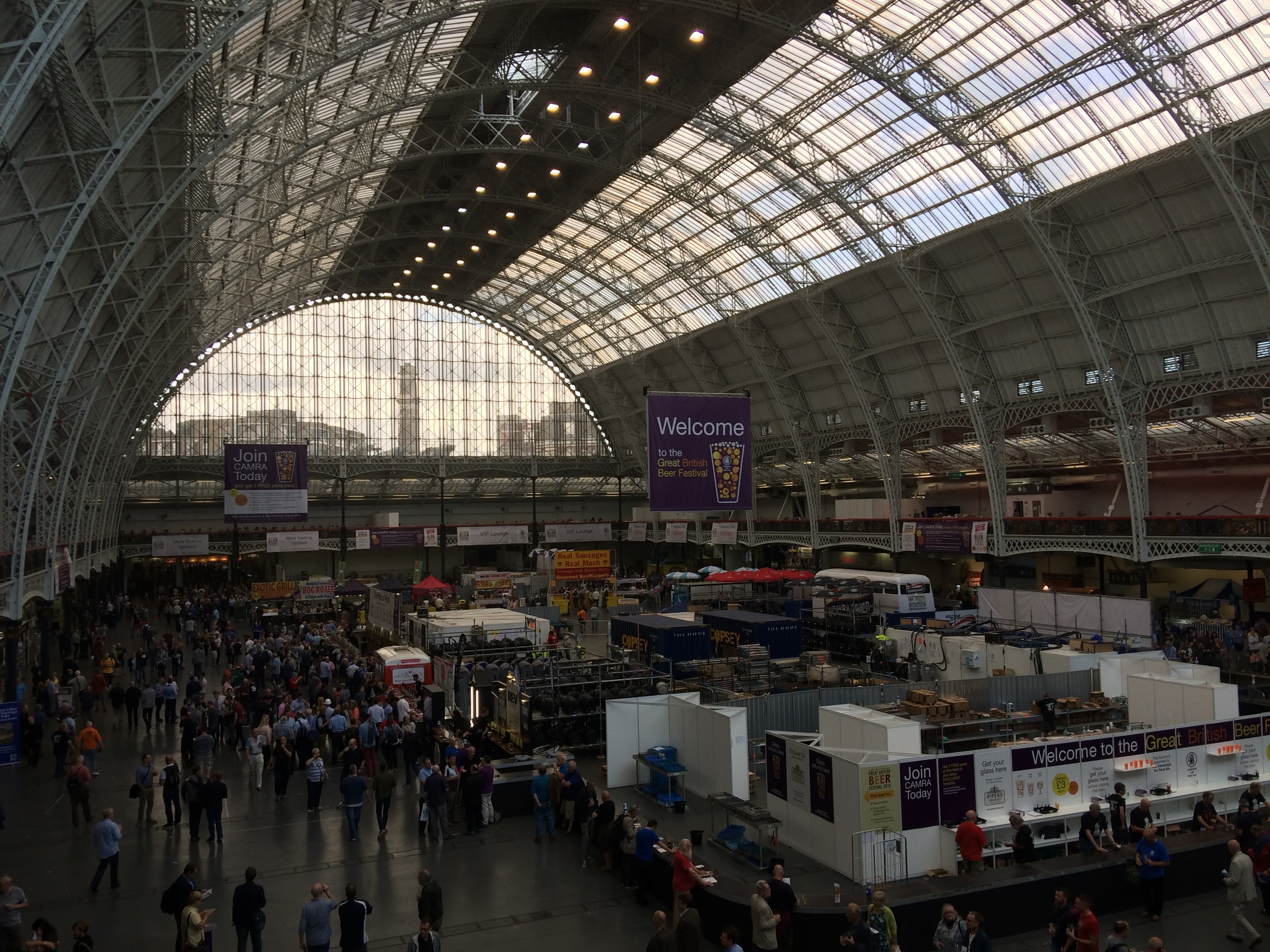 The organisers managed to invoke the ire of many a beer geek, who are known for their carefree attitude, by moving the announcement of the Champion Beer of Britain from the event itself to a separate awards dinner. This didn’t go down well at the festival and contributed to a fairly muted atmosphere during the afternoon of the trade day. However, many a beer writer quickly jettisoned his/her umbrage as the American Cask Bar opened around that time.

The presence of international beers at GBBF is always contentious. Yes it’s sad to see so many beer people crowded around the American beer bar. Then again the U.S. Brewer’s Association put in a lot of work to make sure the beers present are interesting, eclectic and first-rate. What’s more is that they pay tribute (except for the international bottle bar) to cask ale. They also throw in appearances by brewers or others connected with the breweries. It’s no wonder this bar’s popularity will continue, they put in a serious effort to make it exciting. Unfortunately, two Vermont breweries were due to be there but their beers missed the shipping deadline. For the record, the U.S. beers I tried were Ziggy Stardust (Boulder Beer Co.), Daydream IPA (Santiam Brewing); Hop Hunter IPA (Sierra Nevada); and Spruce Tip Session Ale (Urban Farm Fermentory).

Anyway back to the Champion Beer of Britain. I was expecting some ardent CAMRA folk to have picketed the dinner. Did it happen? I don’t know but then again coverage of the actual awards dinner on twitter was poor. There seemed to be only two people tweeting from the event. I was keeping an eye on proceedings more out of curiosity to see if any of the beers I had tried during the first day made the final three. 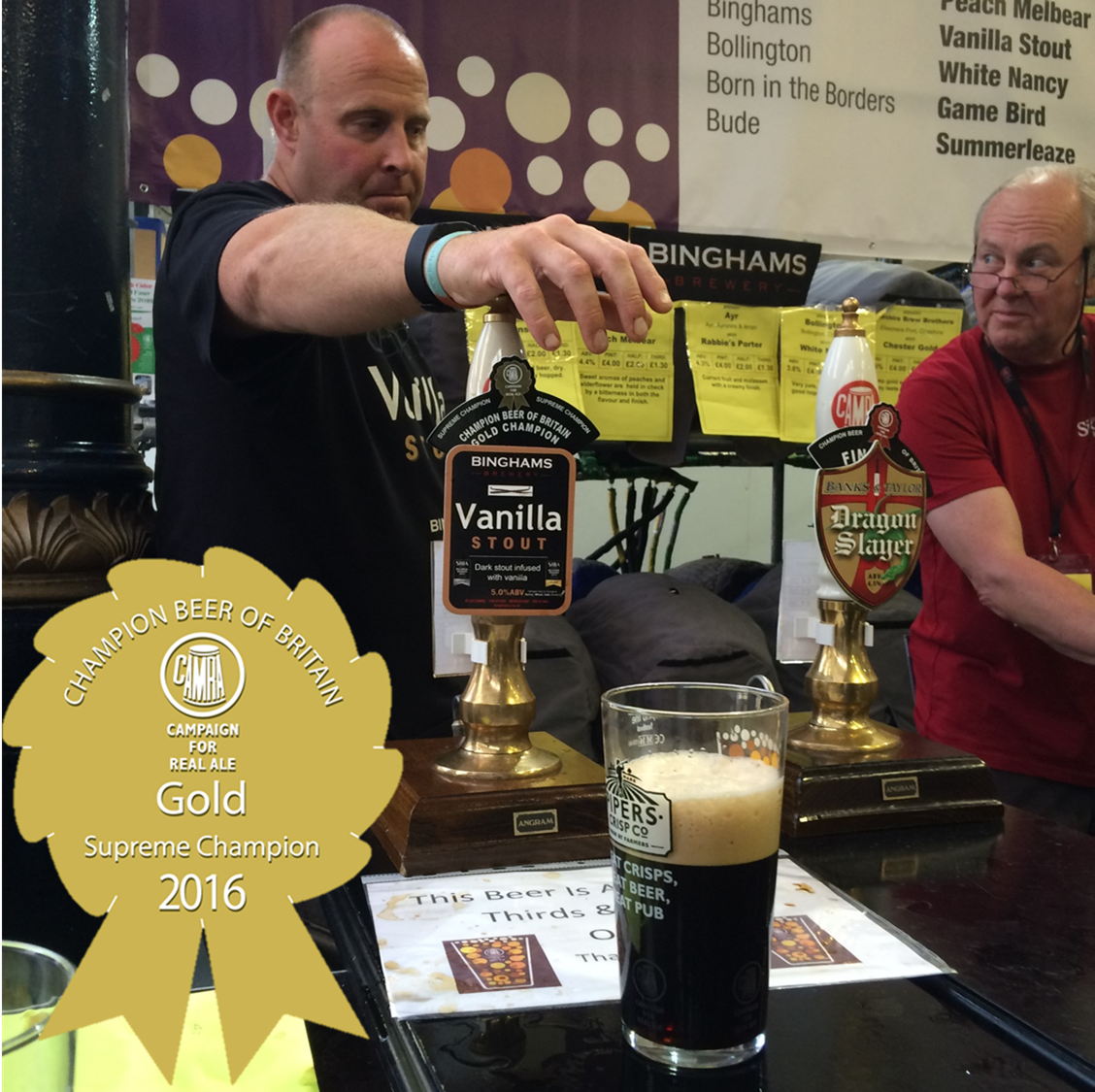 As luck would have it, my brother Eoin had a pint of Binghams Vanilla Stout in front of him. It was his beer for the road. That was probably the last pint of it (or close to it) sold at the festival during the rest of the week – the Supreme Champion Beer of Britain being limited to third or half-pint pours. Thankfully, I had tried it earlier because it would’ve made the brother’s smugness all the more unbearable. The beer was smooth, silky with a pleasant vanilla hit – reminiscent of a quality chocolate truffle. Whilst there was a hint of sweetness in it, the vanilla didn’t overpower the character of this beer. It was well-balanced and drinkable. 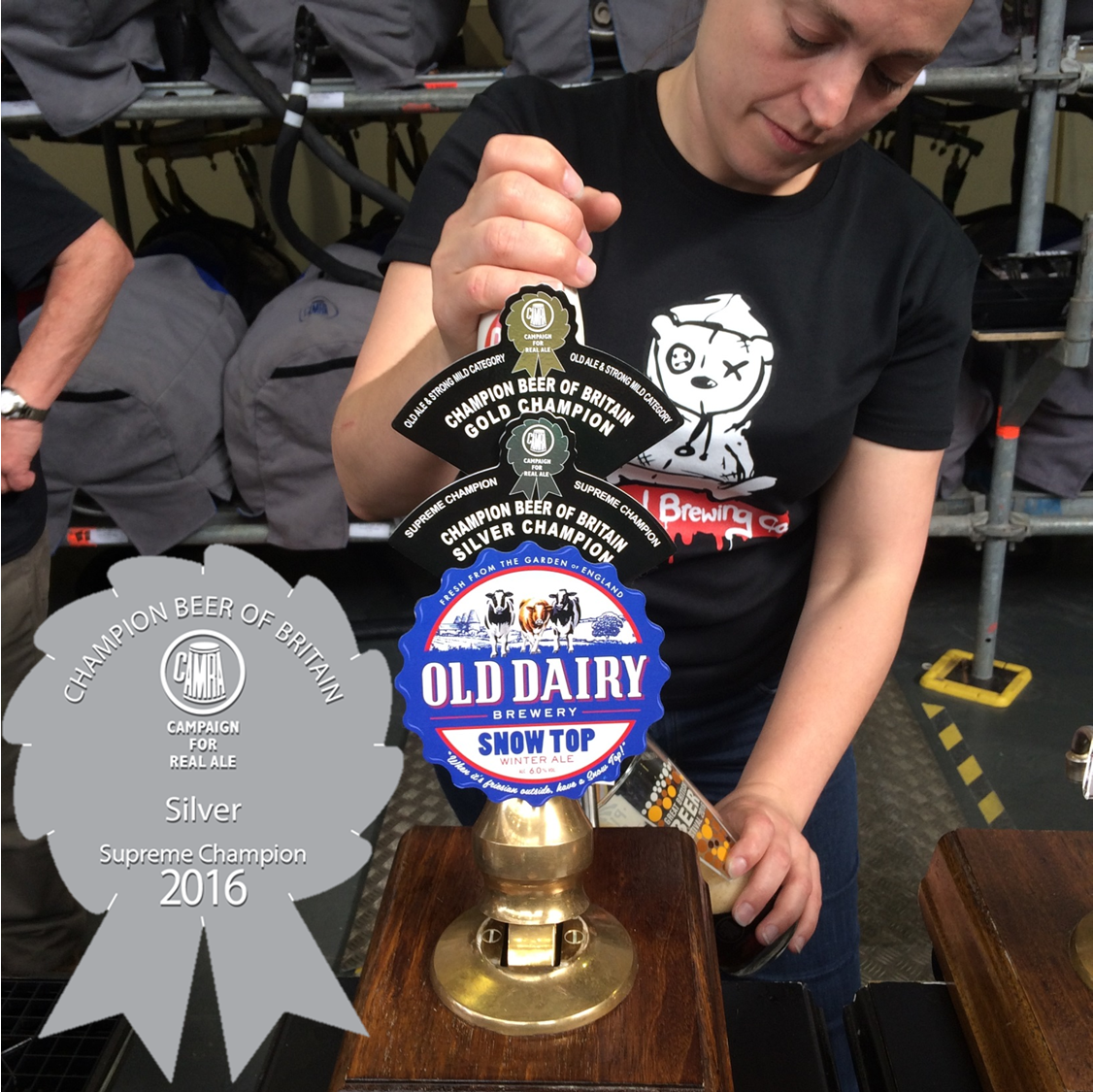 This year’s three overall medallists would be even more enjoyable when the weather gets colder. It was also the first time a speciality beer won the overall prize and no doubt will be an answer in many a future CAMRA themed table quiz.  There was obviously a preference amongst the judges for darker beers this year. Snow Top by Old Dairy, a 6% abv (plenty of spice, winter fruits on the nose, warming and toasty) took silver and Tring’s Death or Glory, a 7.2% abv barley wine (not overly sweet, dark fruits, marmalade, and spice) taking home the bronze. 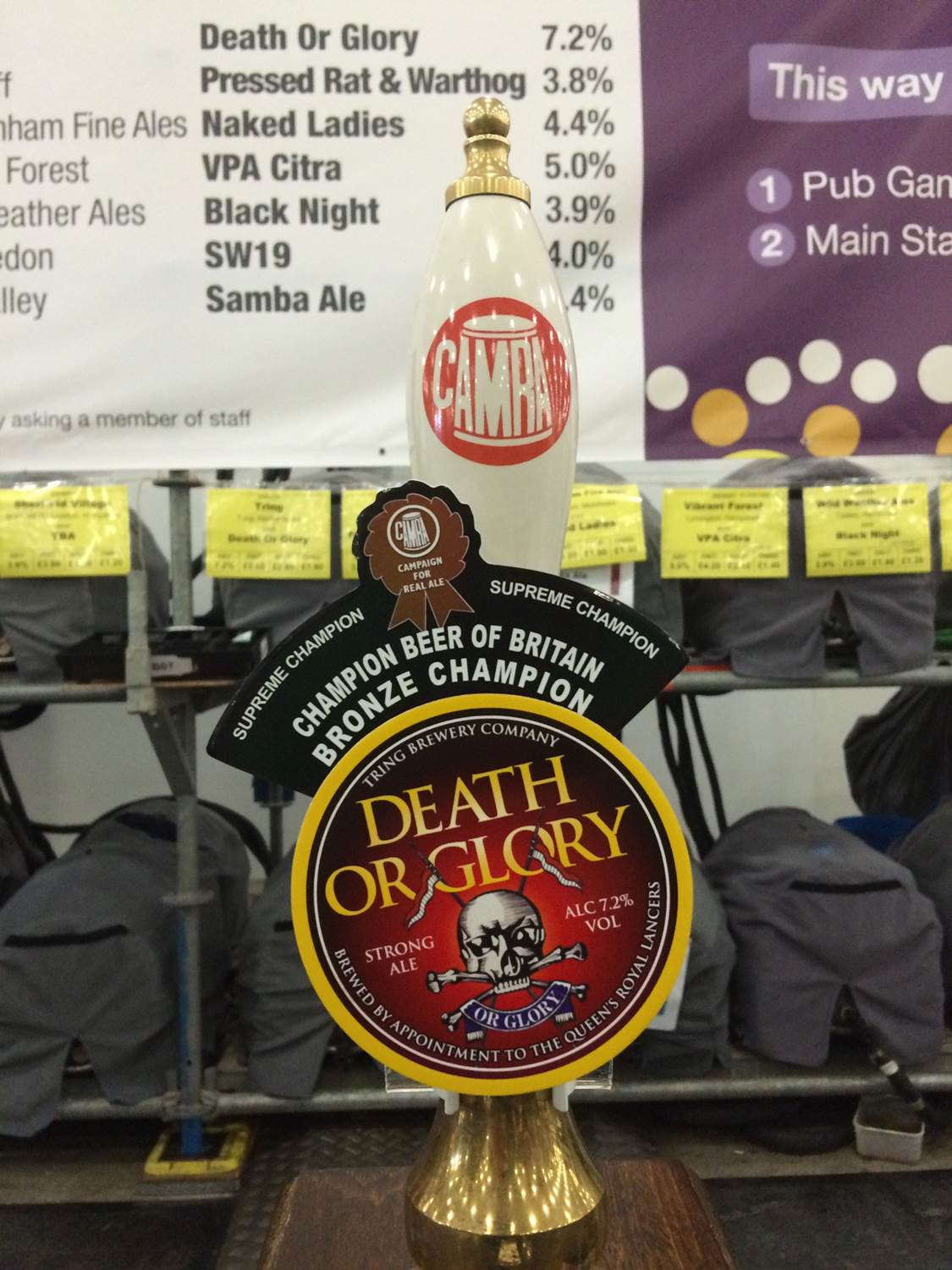 There were some excellent stouts and porters on offer. Particular highlights for me were Crafty Stoat (Wibblers); Old Growler (Nethergate); Boss Black (Boss); Lambeth Walk (By the Horns); and Parabellum Milk Stout (Gun); Triple Chocoholic (Saltaire); and Chocolate Marble (Marble). Speaking of Marble, I enjoyed its lemony Earl Grey IPA and thought Lagonda IPA deserved better than bronze in the golden ale category. Other pale and IPAs worth a shout out include Nova (Bristol Beer Factory); Nor’ Hop (Moor Beer); Revelation (Dark Star); Magus (Durham); 77 (Heavy Industry); and Gyle 1500 (Flowerpots), although it’s billed as a red ale, given its hop profile it can pass somewhat as a red IPA. In case you’re wondering, no I did not forget to sample some mild and yes, I did try Fullers annual Vintage release. The 2016 version had plenty of the expectant vinuous notes, it could do with a bit more ageing.

A nice touch at the festival was to be found just inside the front door. Too often London breweries were underrepresented at the festival. This was a shame because there’s some amazing things happening in the city’s local beer scene. London Beer City grew up in and around GBBF and some might say, in response to it. London is definitely a front line in the craft versus real ale battle. Thankfully, the Real Ale in a Bottle bar returned to GBBF this year with offerings (all bottle conditioned) from Kernel, Redemption, Orbit, Partizan and others. Giving myself a break from the cask offerings, I enjoyed Weird Beard’s Saison 14. It hit all the right notes, with plenty of esters and leather in the flavour. The carbonation levels were spot on and set me up nicely for more beer tasting. I must say that Weird Beard is certainly a brewery that’s getting better both in terms of quality and consistency.

Earlier I mentioned that there seemed to be fewer brewery bars at the festival. There was an especially welcome new one. Tiny Rebel has gone from strength to strength since winning the Supreme Champion Beer of Britain accolade last year for Cwtch (still tasting great). Of course, they made a name for themselves well before winning the title but the brewery appears to have stepped up a gear. 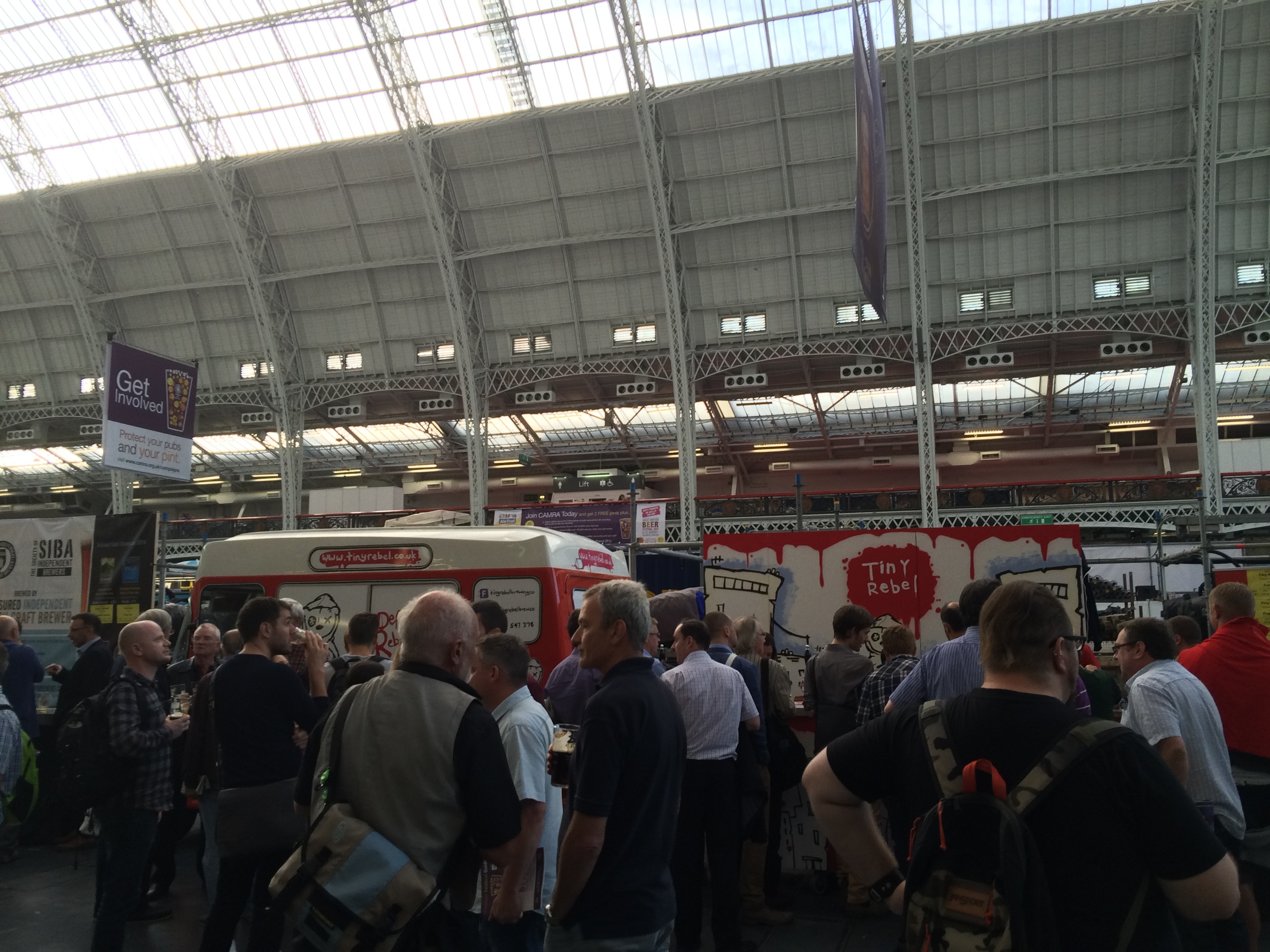 The brewery was out in force at the festival and besides the likes of Fubar and Hadouken, it had Hank, a wonderful session pale ale and Juicy, which as its name suggests was a vibrant fruity all-rounder. As you probably guessed, I spent a fair bit of time at the Tiny Rebel bar, enjoying those beers mentioned, along with their black IPA Loki. It pleasantly avoided even the slightest hints of dark roast and opting to focus on bitter citrus notes. Finally, I could not but try Stay Puft, a 5.2% marshmallow stout. I was a little uncertain of this beer when I first tried it and on the second day, I bit the bullet and tried it again. I admit that this beer grew on me.  It wasn’t overly sweet even though that’s fear elicited by its name and description. The best description would be of a thick and creamy milk(shake) stout. Interesting and was worth having a pint of it. 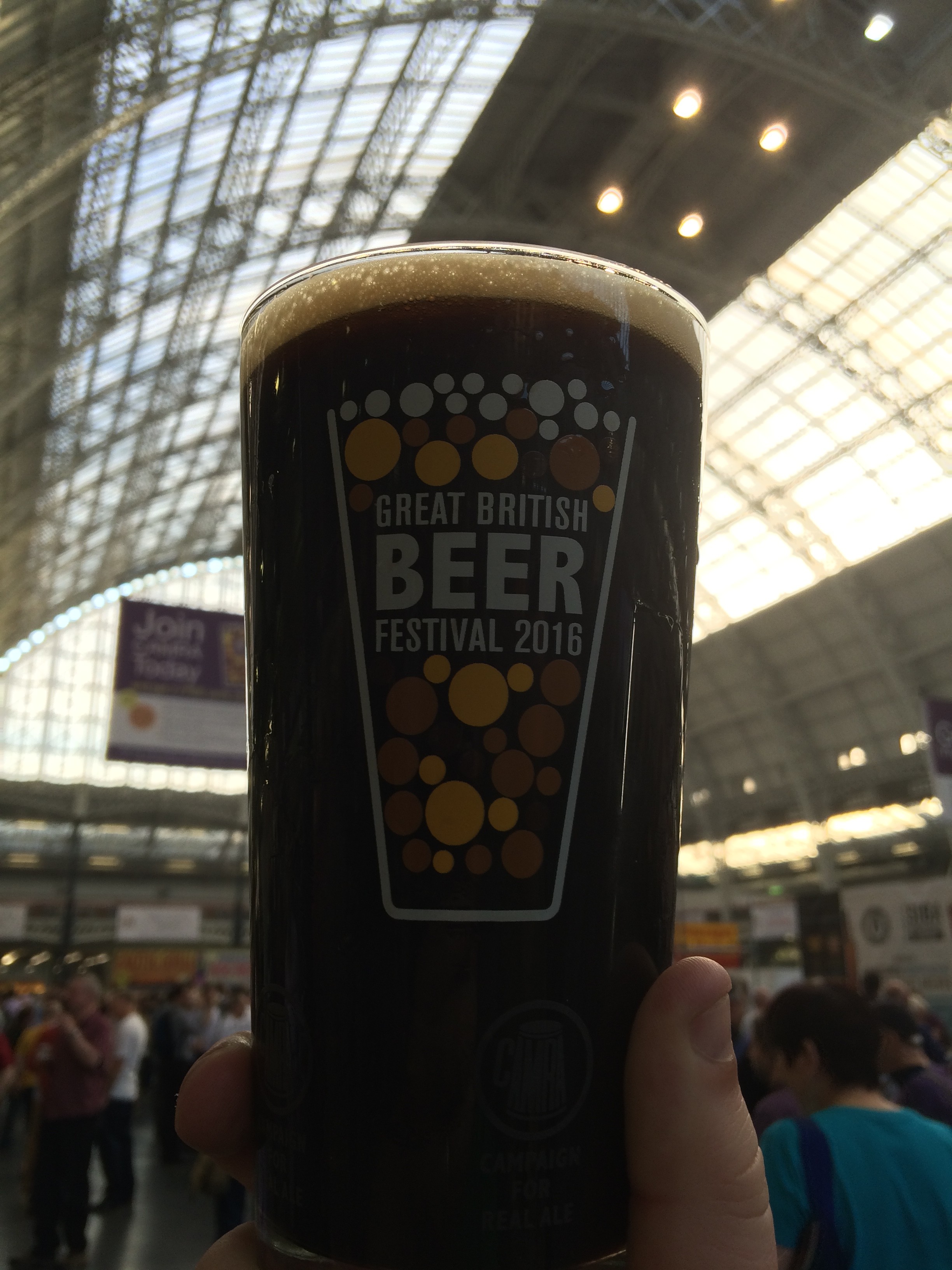 All in all, it was a good festival. More could be done to improve it. There was a lack of atmosphere on the first day that continued into the afternoon of the second day. The venue’s cavernous and could do with a bit of music. Perhaps various buskers dotted around the venue, not just on the stage. The food offering was the best yet. Talk already started of next year’s trip to GBBF 2017.

First, I have the Irish Craft Beer Festival to look forward to. It returns to the RDS on 8th to 10th September. Tickets, opening times and event information can be found here: http://www.irishcraftbeerfestival.ie/