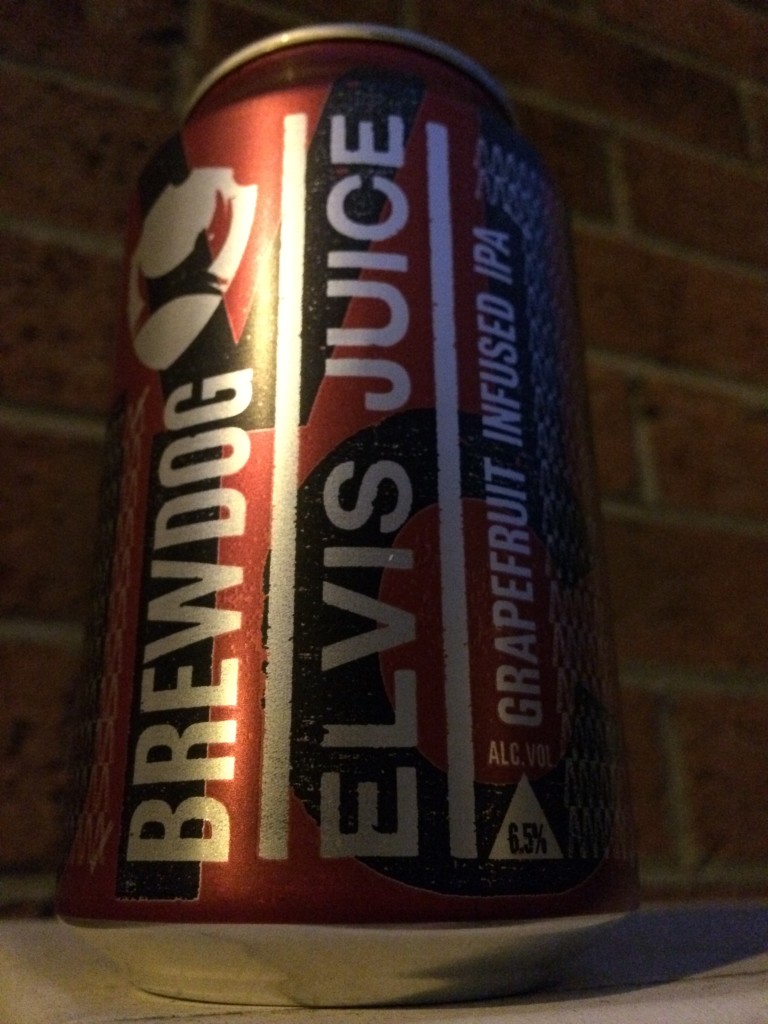 It’s been a while since I had a can of Lilt. So long in fact that I don’t even know if it’s still available. All of this was sparked off by Brewdog’s Elvis Juice. It tastes a lot like Lilt, period.

One could imagine the Brewdog product development team used the following checklist. A grapefruit infused IPA with an aroma consisting largely of, you’ve guessed it, grapefruit. Box ticked. It’s refreshing, even at 6.5% abv. Box ticked. Did I mention that this beer is 6.5% abv? Box ticked. Make sure you produce a beer the “punks” will shout about. Box ticked (perhaps this one’s too easy). Use “Elvis” in the name to confuse people. Box ticked. Explore the use of fruit to substitute for high hop prices. Box ticked, or maybe I’m being unfair on that last one.

The beer’s fine. It’s certainly drinkable and the infused grapefruit gives it a vibrant, fresh aroma. Is this cheating though? Before you judge me too harshly, yes I’m more than aware that infused beers have been around for yonks – even for the IPA style. I’m just not convinced that this beer in particular works.

Beer geeks have been hyper-critical of the new wave of radler-style offerings popping up here, there and everywhere. Why should fruit-infused IPAs be treated differently? Okay, darker versions may be better but even then they play the Terry’s Chocolate Orange card. Overall, craft infused-beers do tend to be better balanced in bitterness and drinkability – Elvis Juice has a somewhat muted dry bitterness to it.

The appearance of so many fruit-infused IPAs of late merely point to the latest fad off-shoot of the overall style. Of course they’re appealing. I can see them becoming big sellers. They could even be useful in beer cocktails for those so inclined. A 3-3.5% abv or lower version could be huge, especially during the summer. Then again the neo-prohibitionist lobby could brand them in the alco-pop territory.

For me, I prefer a lot more out of a beer than this particular beer. If I want a refreshing grapefruit hit in abundance, I’d stick to the likes of San Pellegrino before moving onto beer. Brewdog certainly produce better beers than this but then again, who am I to judge this beer’s appeal.

Bord Bia, the Irish Food Board, has seriously stepped up its support for Irish craft beer. In the not so distant past, the agency was perceived to be more interested in promoting food rather than drink, save for a few token appearances of the likes of Jameson or Baileys. Of course this ignores the support for the occasional brewer like Carlow Brewing or Galway Hooker accessing export market data, making contacts or attending international events over the years. There has also been research reports and seminars conducted in the past. However, the inclusion of brewers in the Origin Green initiative and the focus in the Food Wise 2025 strategy underpin the renewed emphasis on Ireland’s drinks industry. Let’s not forget that newer breweries are now looking to really develop their export markets as part of their overall business strategy.

I have written on Bord Bia and the strategy of the government on various occasions on the blog. It is interesting to watch how craft beer is being promoted alongside our other food and drink offerings. There’s a trend to officially connect craft beer to other products. We have been doing so locally and independently for years but it’s great to see government channels exploiting the “Irishness” of craft beer. They’ve realises that these beers are interesting, new and have stories of their own.

Just a week ago Carlow Brewing, Boyne Brewing, Clever Man, Galway Hooker, The White Hag Brewery and Wicklow Wolf joined other drinks producers at the inaugural “Spirit of Sharing” event in London. The event was hosted in the Irish Embassy, which is a stones-throw from Buckingham Palace. It’s an impressive venue and no doubt would’ve helped attract potential customers the event. It was a somewhat regal trade event. The setting has been used effectively in the past to build export links for other industries so it’s positive that our alcoholic beverage producers can tap the same support. Let’s hope it can be replicated in other countries.

A full house for our 20 producers at #spiritofsharing event in London meeting trade & media. pic.twitter.com/0y6xff2R27

With St. Patrick’s Day upon us, initiatives ranging from greening monuments around the world to the traditional presentation of the bowl of Shamrock to the President of the USA show that we have unprecedented access for a country of our size in a ‘one week only’ sort of way. Bord Bia will of course use official events this week to promote food and drink. However, it went one step further this year by securing agreement to present both President Obama and Vice President Biden hampers fully-loaded with Irish produce. Taking pride of place in each hamper, was a bottle of O’Hara’s barrel-aged Leann Folláin. I’m sure POTUS, as a homebrewer, will appreciate this excellent beer. I have no doubt the VEEP will do so likewise and hopefully he’ll sip whilst reading one of his many collections of Yeats’ work.

Let’s see this trend continue. Enterprise Ireland is also stepping up to the mark by supporting a few craft brewers and having a new team looking at promoting food and drink exports. Even established investment funds are look at beer and whiskey as growth markets. Things are certainly on the up and I’ll drink to that.