The term “flower power” immediately conjures up images of hippies, psychedelic drugs, music and VW Westfalia camper vans. It’s over-used these days and is a tad unoriginal for a beer name. Ratebeer.com currently lists 33 beers having this name). New York’s Ithaca Beer Company perhaps can lay a partial, legitimate claim to the name, being only a short 8 hour drive from Woodstock.

I recently tried a pint of Flower Power (7.5% abv) in New York City. Its appearance was orange mist and gold. The nose was of fresh pine, not a hint of floral or fruit notes. The body was a little thin and appeared intentionally to amp up the bitterness. Lightly carbonated and bitter on tasting – nothing else. The mouthfeel was chewy with unwelcome notes of plastic. It gave way to a pure, spicy bitter finish. 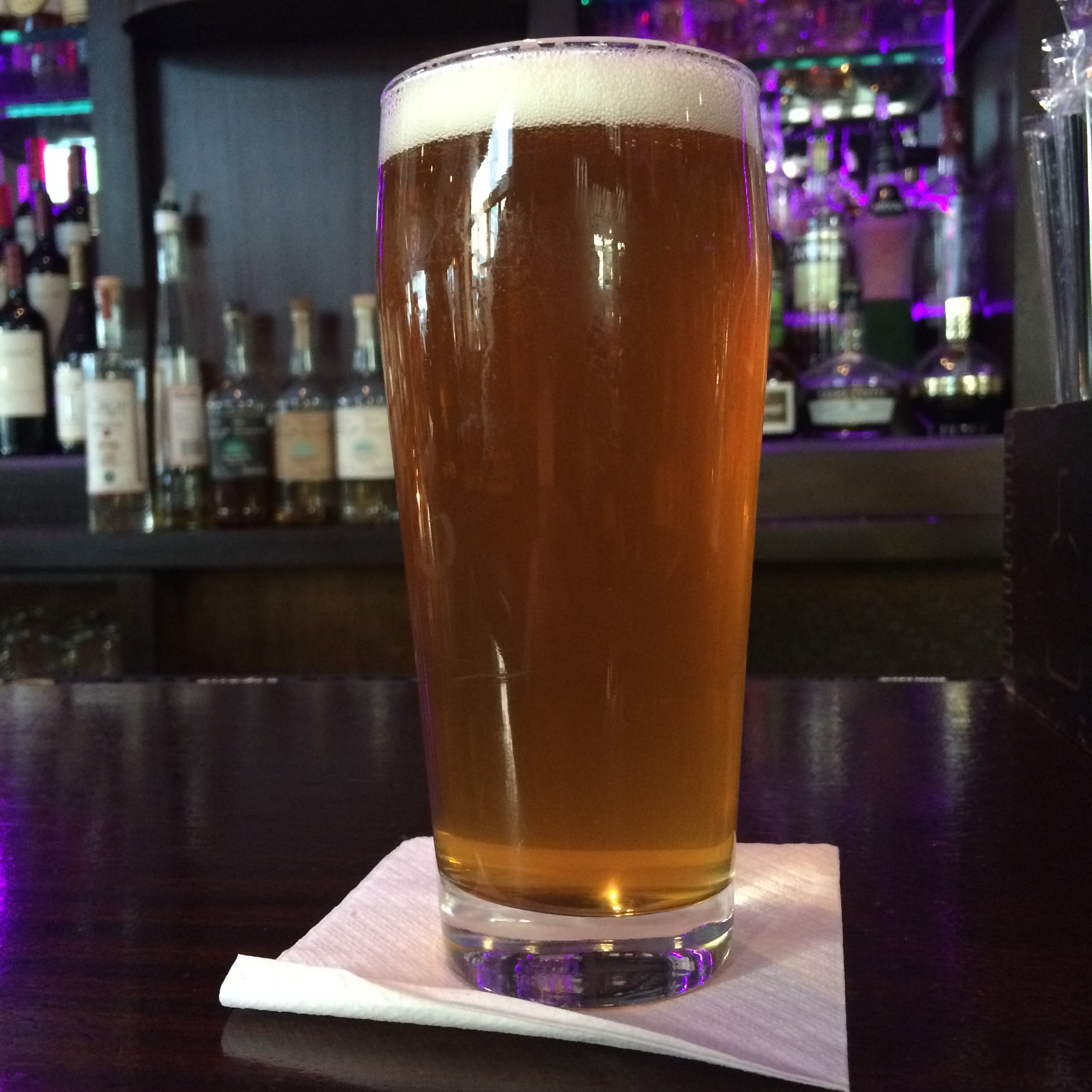 I’ve certainly had better IPAs but I’m not sure that this was even the best representation of this beer. Usually, I prefer judging beers from bottles or cans because you’re also at the mercy of the bar, pub or restaurant storing and serving the beer correctly. Might this be one of those occasions? I don’t know but it’s possible. For example, I couldn’t detect the use of simcoe, citra and amarillo notes but plenty of “c” hops.

If I see a bottle of this beer floating about, I’d be tempted try it again. As it is, the beer I tried was so aggressive that Bob Dylan could pen a protest tune about it.

I’m a reader. I stick to non-fiction over fiction and this probably explains why I chose to study history in college. Books on beer are a popular preference but I read it all – politics, business, history, various biographies and the like.

When travelling, I usually duck into the bookshop at the airport or train station to buy the paper and the occasional longer read. The range of nonfiction books is limited and with the exception of the latest releases, they rarely change. I don’t know who puts the range together but there’s always a heavy emphasis on motivation and self-help. This indicates that the modern traveller needs all the help they can get. One book regularly features – The Road Less Travelled by M. Scott Peck.

This particular book has influenced a lot of those motivational posters and countless more PowerPoint slides used in business training seminars. They all seem to focus on a fork in the road leading to choices having to be made. Thankfully for a few people in Stratford, Connecticut this meant taking the leap and opening a brewery four years ago. They went one further and actually named the brewery after this principle – Two Roads Brewing Company. 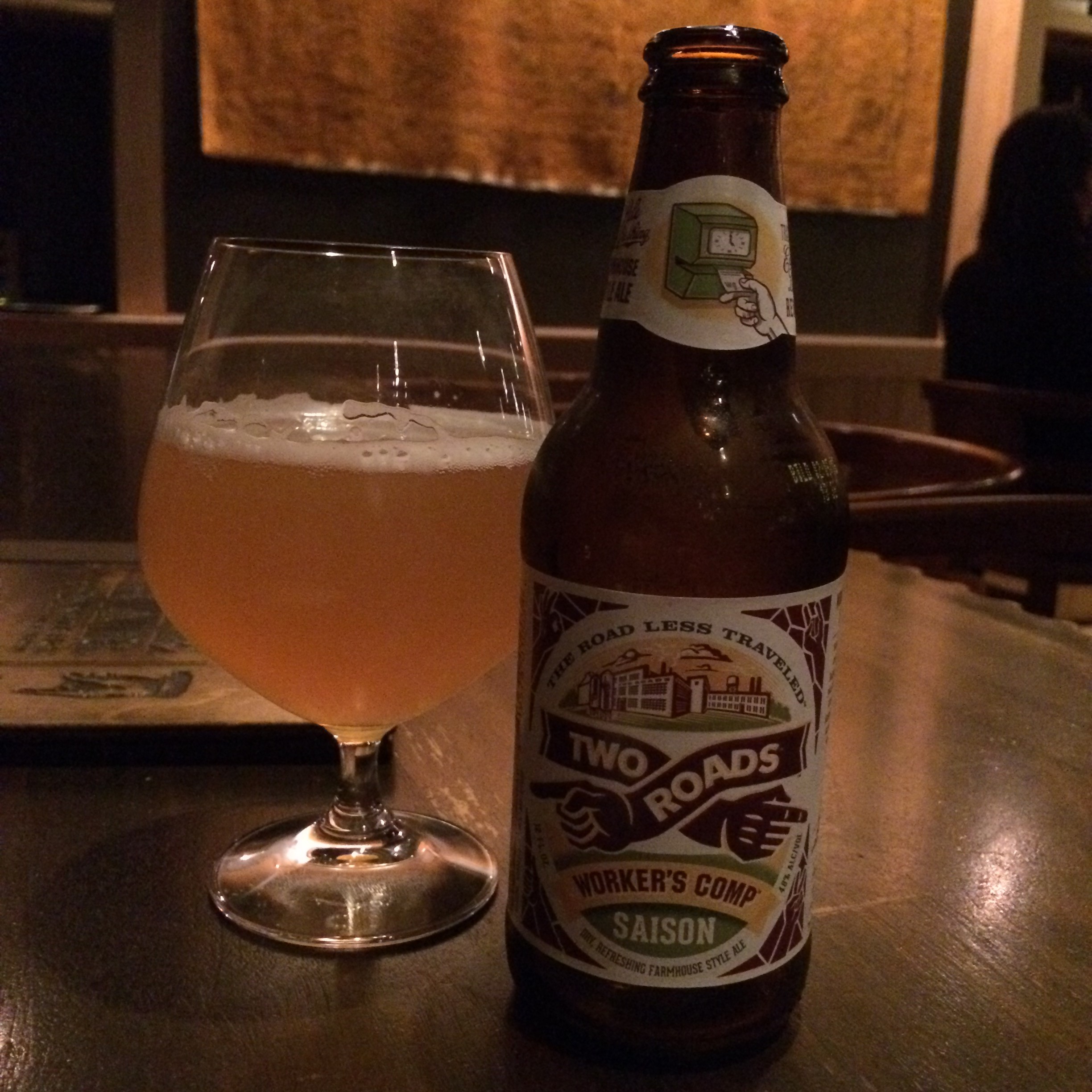 Recently, I got to try their Worker’s Comp Saison. First of all, this is a great name for a beer named in honour of the saisonaires. It may be a saison but it’s not a seasonal offering. This style is quickly replacing wheat beers as a year-round staple of US craft breweries.

The beer’s appearance was of a late-summer sun haze. For the aroma, think big, funky farmyard aromatics along with fruity esters. The fruit aromas were a complex blend ranging from an expectant lemon citrus right through to more exotic, topical notes. This beer is peppery carbonated tartness in a glass. There’s a bitter lemon twist to this beer. There’s a big dry, peppery finish to this beer. It’s almost as if you’d lightly seasoned your tongue.

The flavours and other characteristics of the style are wonderfully pronounced. At only 4.8% abv, this is a wonderful session beer. I had no regrets in selecting this beer from a few other local offerings and other high profile but hard-to-get beers on this side of the Atlantic. I was my own “road less travelled” moment I suppose. My only regret is that I only had time for one.

With the heatwave Ireland’s experiencing, I was invited on to the Ray D’Arcy Show on RTÉ Radio One on Friday 3 June to talk about beer… what else? The segment was dubbed BBQs, Beer and Sunny Weather! It was cool to be on with Ray finally as I never managed to make the Blackboard Jungle team back in school and this is still a sore spot for the quiz enthusiast that I am. I was on with the renowned chef Oliver Dunne and RTÉ’s very own Evelyn Cusack. If that wasn’t enough, Ray also had in studio, Hermitage Green to get us in the bank holiday spirit.

My brief was to suggest beers for someone dipping their toe in the ‘craft beer’ world over the long and sunny bank holiday. Accessibility was vital. The beers couldn’t be too high in alcohol, session beers were key. I was also asked to recommend a cider and a non-alcoholic beer. Each pick should be generally available across Ireland, not an easy thing when it comes to craft (even these days).  It was also suggested that I tone down the “beer geek” speak. So here were the five beers and one cider that I chose to make up my Six Pack of Summer. All of these were sourced in Baggot Street Wines, the ‘National Off-Licence of the Year 2016’.

Victory Summer Love – This beer is as bright as the summer sun. Golden ales are transition beers, easing the path for lager drinkers to the world of ales. Oh, it’s another fantastic craft release in a can, perfect for outside drinking. The label features America’s favourite pastime with games lasting around three sun-soaked hours, an easy drinking beer is in order. At 5.2% abv Summer Love may be a tad on the high side but other ales like Brooklyn’s Summer Ale or closer to home, you could look to Dungarvan’s Helvick Gold but the brewery’s summer seasonal Comeragh Challenger (it’s gluten free as well) would hit the spot. 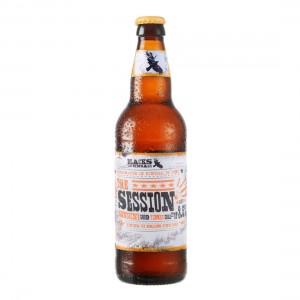 Black’s of Kinsale The Session – There’s a perception out there that craft is only about high alcohol beers but session IPAs and pale ales are gaining in popularity. Founders All Day IPA anyone? Well-made versions can pack in the hop bitterness, flavour and aroma at session strength. This one from Sam Black fits this bill perfectly and is only 3.5% abv. 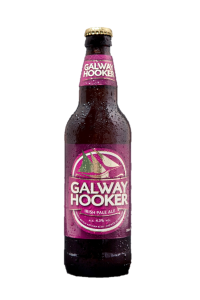 Galway Hooker – This is a great beer to go with food. Use it in batter but it’s even better with burgers, sausages, really anything on a BBQ. It balances out the tanginess of ketchup.   It’s one of my favourite go-to beers. At 4.3% abv this beer is to enjoy several bottles or pints on their own. 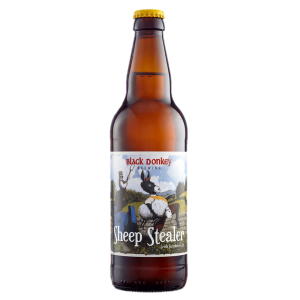 Black Donkey Sheep Stealer – This ‘farmhouse ale’ is perfect as this classic style was traditionally brewed in winter to give to farm hands in the Belgian fields in the summer. It’s effervescent, spicy, fruity, if you like wheat beers, you’ll like this. Also, try giving it to people who usually drink wine. They shouldn’t be disappointed. Sheep Stealer is perfect grilled food especially fish. Also, look out for Swingletree by Kinnegar for a higher but no less drinkable abv version. 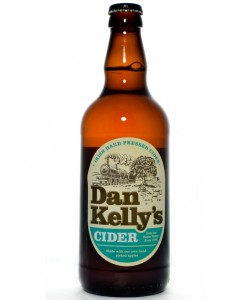 Dan Kelly’s Cider – I’m not usually a cider drinker but then again my perception is based on developing a dislike for overly sweet mass-produced versions. This one isn’t and together with lower carbonation levels, it brings out more natural flavours grown on the McNeece family orchard. You pass through it on the Dublin-Belfast train-line. 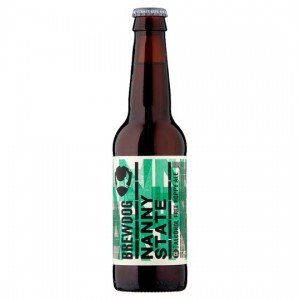 BrewDog Nanny State – BrewDog appears to Ryanair of breweries. I’m not talking about low-cost but rather the fact that  they like to annoy as much as they like to make beer. Seven years ago they got criticised for Tokyo*, an imperial Russian stout at 18.2% abv. Their response was to brew a beer at only 1.1% abv, not subject to beer duties and called it Nanny State. The beer has since been revised down to 0.5% abv. Thanks to the addition of four hop varieties and eight specialty malts, this dark ale has flavour and life to it. Too many non-alcoholic beers have little to them. It’s as if when they removed the alcohol, they also removed the taste. Many N/A lagers fall into this but wheat beers thanks to their ingredients fair better. Nanny State on the other hand can sate the taste-buds of hop heads should they need a quick and painless hit. It’s a little more extreme than other N/A beers out there.