There’s a perceptible rise in tension between some of the large breweries in Ireland. This goes beyond the normal uber-competitive nature to retain or grow market share. The aggressive stance being taken by breweries appear to be a result from the determination of Molson Coors to establish itself within the Irish market.

Not just content with its acquisition of Franciscan Well, Molson Coors already holds 10% of the Irish lager market and is determined to raise its influence with the on-trade. This includes independent licensed premises being offered up to 30% saving on their Sky TV commercial subscription when combined with stocking drinks from Molson Coors’ portfolio. It has also invested heavily in launching Molson Canadian in Ireland, with a large advertising spend and drinks promotions. One particular ad was subject on the Joe Duffy Show because it featured the statue of Jim Larkin, anti-capitalist and noted teetotaler.

C&C Gleeson has a remarkable slice of the on-trade market in Ireland, no doubt built on the back of Bulmers and a large distribution business. Clearly not happy with potential threat of Molson Coors, the company is taking note of new offerings offered by their rivals. It would seem that Smithwicks Pale Ale has seen off the threat of Caledonian Smooth. The new front this time is the lucrative lager market and clearly focused on Molson Coors. First, was the roll-out of Heverlee, a premium Belgian beer that recreates a “classic bygone taste” (i.e. before craft beer). They followed this up with the launch of Irish-made lager, which was launched on 31 July 2014.

Clonmel 1650 is being billed as “a Pilsner-style lager with an ABV of 4.3%, this medium-bodied lager delivers the key attributes expected from a Pilsner, but with a particularly memorable taste which hovers between slightly fruity, estery and subtly hoppy”. All of this is code for yet another inoffensive lager (except when perhaps presented with the price for it). The poignancy of the name should not be ignored. The Siege of Clonmel took place in 1650, where 2,000 inhabitants held out for 5 weeks against Cromwell’s foreign army of 8,000 strong. According to the press release and ignoring the origins of pilsner, this beer wants to be hailed for its “Irishness”. 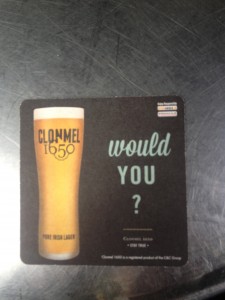 The advertising and branding for this beer is clearly targeting both Molson Coors and Diageo. It’s being billed as “Irishness” v “Foreigness”. They’ve borrowed some of the popular lines of attack from the craft beer movement. 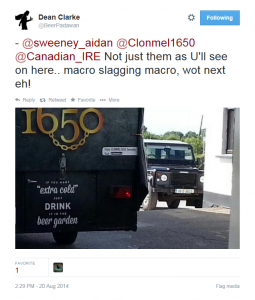