Britain goes to the polls tomorrow. The outcome of General Election 2015 will likely have an effect on the British beer industry, well, the entire alcohol industry. As a bit of a political anorak, I couldn’t help but scan each party’s manifesto to see what alcohol measures were being put forward. The following doesn’t include other business-friendly policies, such as commitments to reduce business rates, which would benefit the brewing industry.

Over the duration of this past parliament, an interesting shift has taken place in attitudes to the alcohol industry. This has been on the back of heavy lobbying by the Campaign for Real Ale (CAMRA), the Society of Independent Brewers (SIBA), publicans, the industry directly and a few umbrella campaigns. Tax breaks for small breweries were improved. The infamous duty escalator was abolished and Budget 2015 marked the third year in a row of cuts to the beer tax. These cuts were small but symbolic. The lasting impact, however, of the duty escalator remains. Between 2008 and 2012, excise duty on beer increased by 42%, thanks to the British economy witnessing high inflation during those years. This is the big reason that pints have been topping £4 and above. 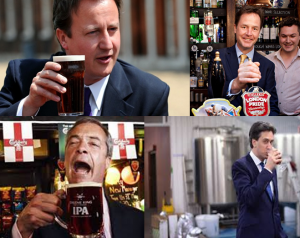 Of course, alcohol is again being singled out as a key contributor to crime and violence. A number of measures are being put forward to tackle the anti-social behaviour. More support is being promised by the majority of parties to tackle the issue of alcohol dependency. These are the ‘old dependables’ in policy terms.

The introduction of minimum unit pricing (MUP) seems to be the flavour of the day. The rationale put forward is that it will help to curb alcohol-fuelled violence and reduce binge drinking etc.  Interestingly, the Conservative party remains silent on the issue. Back in 2013, the party ditched plans to introduce such a measure at the eleventh hour. Only UKIP remain vehemently opposed to MUP. While some are awaiting the outcome of the legal challenge to the Scottish case (Liberal Democrats), others go so far as to suggest prices to be charged per unit. This can range from 50p per unit on all alcohol (Plaid Cymru) to “40p per unit of beer and cider to 50p per unit of spirits” (Ulster Unionist Party).

Alcohol sponsorship of sport is also proving to be a hot topic. Yes, this may be more of an issue for macro-breweries but there are potential local issues involving regional and small breweries. While we may not see it in football, there are a number of county cricket teams that receive some sponsorship from their local breweries. This is not to say it doesn’t happen with rugby. The Green King IPA Championship aside, local clubs often look to their local breweries for support. The Tories, Labour and UKIP are campaigning to retain such sponsorship. The Lib Dems are silent on the issue but the Greens are against such sponsorship and are advocating a complete ban on “advertising (direct or indirect) and product placement on remuneration or reward”. 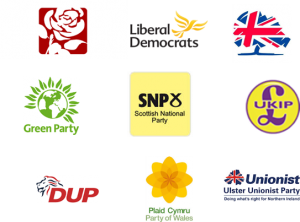 Two parties are actively promoting ‘personal freedom’ policies but come at it from completely different angles. The Green Party wants to decriminalise cannabis because “people should not be criminalised for the recreational use of a drug which is no more harmful than alcohol or tobacco”. In fact, they want to regulate it in a similar manner to alcohol and they are pushing for tougher regulations on alcohol. On the other hand, UKIP wants to reverse the plain packaging legislation and to “amend the smoking ban to give pubs and clubs the choice to open smoking rooms provided they are properly ventilated and physically separated from non-smoking areas”.

This is not to say that policies won’t pop up in the next Parliament. Some may be harder to enact. Examples of such policies may be along the lines of UKIP’s one-time policy to ban long-term welfare recipients from buying alcohol and the Scottish National Party’s attempts to prohibit purchasing of alcohol online from English retailers. Other examples might include banning happy hours in Northern Ireland and the DUP proposal to explore the introduction of a rates levy on off licences and supermarkets that sell alcohol. The revenue generated by this “could be used for dealing with adverse impacts of alcohol abuse in society”. The Green Party wants to go so far as to increase the tax on the “net profits of tobacco companies and companies producing alcohol for consumption”. These proposed taxes would be in propoprtion to the amount of alcohol in the finished products. 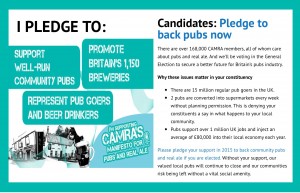 CAMRA have been running a visible campaign (www.ge2015.camra.org.uk) in the run-up to the general election, including stands at the main party conferences. They have received pledges from over 1,000 prospective MPs to “support well-run community pubs”, “promote Britain’s 1,300 breweries” and “represent pub goers and beer drinkers”. This includes letters from Ed Miliband and David Cameron.  “The Labour Party are leading the pack as most pub and beer friendly,” according to the real ale body, with pledges from 292 election candidates, “followed closely by the Green Party (264), with Liberal Democrats in third place (225), Conservatives in fourth (160), and UKIP bringing up the rear in fifth (118), although famously pro-pub UKIP leader Nigel Farage is among those pledging support”.

Food and drink have played a visible part in the general election campaign, from Ed Miliband bungling the eating of a bacon sandwich to the constant photos of Nigel Farage with a pint in hand. They’re easy props for photo ops, but they’re very presence may be significant. It’s reasonable to assume that the recent policy developments and new promises could indeed herald better times for Britain’s beer industry.

Of course, if a voter casts their ballot purely on the basis of what their MP might do for alcohol, their beer goggles might be on a little tight… But as a beer lover, I have to say, I’ve heard worse reasons for going out and voting.