Over the summer Eight Degrees released their latest limited edition beer, Nomad. It’s an India Pale Lager folks. What’s that you say? It’s a style that has many detractors. A few see it as just an excuse to introduce a little variety to the IPA. The common denominator being hops and lots of them. It may fall outside style guides and the majority may be just going for the hop hype effect. However, when it is made well, it can be something to be sought after. Who better than then the likes of the Mitchelstown crew to try their hand at this. They’ve made some truly fantastic stuff over the past few years. Not only do they love what they’re doing, just as importantly they know what they’re doing. 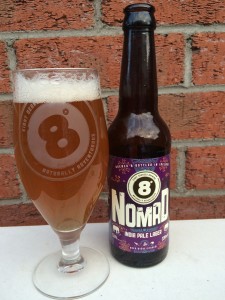 Nomad pours a golden rich honey colour. But as you look at this beer, you become conscious that this beer has a big, big aroma. Think pungent pineapple, kiwi and tangerines. It’s fresh. There’s a crisp bite to this beer with the first sip. There’s no sense of sweetness there. There’s a similarity with the likes of Jever and other northern German lagers but that’s where it ends. This beer certainly cannot be described as austere. It’s anything but. The aroma blends superbly with the clean, bitter body and finish.

Nomad screams out for food to be savoured alongside it. It could be one of the better beers this summer to have a with a good burger. It has bitter and crispness, along with a degree of heftiness that could match the char, red meat and an overdose of toppings that are burgers these days.

The beer works but like other IPLs, would people keep looking for this style of beer? Nomad makes a good seasonal release for sure. However, will hop heads continue with this style beyond the rare occasion? It’s doubtful beyond those ticking it off the list. But the willingness of Eight Degrees to constantly give things a go is to be admired. They have enough in their core range to appeal to varying tastes and that’s before we get to their rotating range of specials.  In fact, you could look to their limited releases to get a full picture of the challenges facing the IPA today. Besides changing up the hop bill for various releases, there has been black, white, double, single hop, single malt and session IPAs all from this brewery. This is replicated across the globe.

It’s great how traditions have built up over the years and Oktoberfest is one of them. Bars and breweries the world over clamour to carry out their own commemorations of the annual 16-day celebration of beer (could go on for a 17th day due to a technicality) that takes place in München. However, most are caught out by one thing, the majority of the actual Oktoberfest celebrations take place in late September. Apart from the occasional bar or two (where one was greeted by the sight of Alan & co in the Brewdock decked out in lederhousen) and the IFSC pop-up Erdinger extravaganza, it seems most bars wait until October to break out the Bauhaus. 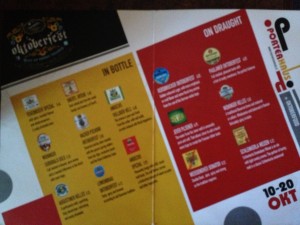 I had the opportunity to attend the launch of the Porterhouse’s Oktoberfest earlier this month and in keeping with the Irish approach to “die Wies’n” I waited until now to blog about it. Not all the beers offered during the festival would be considered beers allowed to be served in Munich (6% beers brewed within the city limits by Paulaner, Hacker-Pschorr, Augustiner, Spaten, Hofbräu or Löwenbräu). While the only “official” beer was Paulaner’s Oktoberfest Bier, the two weeks in the Porterhouse was more a festival of German brewing generally.  The always excellent bitterly and austere Jever Pilsener (shows that not all austerity emanating from Germany is bad) was available on draught, as was Weissenoher Bonator, Wieninger Helles and Schlenkerla Weizen. In bottles, there was Augustiner Helles, Tegernseer Spezial, Wieninger Guidobald Gold in bottles. I had the opportunity to do tastings of most of these beers in Probus over the course of the year thankfully because precious few were in the country over the past few weeks. 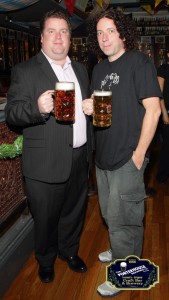 For the festival, the Porterhouse brought back its seasonal brew Hersburcker Oktoberfest. While it is based on the standard Hersbrucker Pils, it doesn’t have the same level of bitterness and the same level of floral aroma. Instead, it has become a malt-forward beer dominated by its malt bill of Vienna, Caramalt and Munich. It’s malt on the nose and in the taste. The body is golden/amber thanks to the addition of Vienna malt and perhaps is closer to the true Oktoberfestbier/Märzen style. The beer was matured in the brewery for 6 weeks prior to release. The sweet caramel flavour belies its 6% abv. For me the taste is reminiscent of a waffle cone. It has a dry, sugary flavour with the vaguest hint of gingerbread.  It is strongly reminiscent of beers from Hall & Woodhouse’s Badger range such as Tangle Foot and Fursty Ferret. 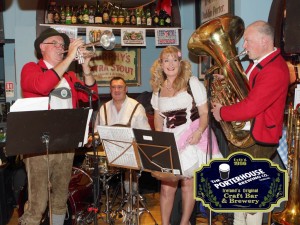 Of course no respectable Oktoberfest would be complete without out an Oompah band. There’s something fantastic about brass bands attempting to belt out popular tunes – the kitscher the better.  And every so soften for them to belt out Ein Prosit followed by “Schenkt ein, trinkt aus, schenkt ein, trinkt aus”, which gets steadily more raucous as the night wears on. There’s a great one on youtube of a band playing Dolly Parton’s 9 to 5. An Oompah band is really the ultimate party band (if the Saw Doctors are unavailable) so forget the DJ and the karaoke.