The new football leagues across are kicking off during the month of August (Sheffield Wednesday thankfully started with a win) and the new English Premier League season starts this weekend. This is not going to be a post about beers and their local teams but rather an emerging trend afflicting both beer and football, the lack of balance.

I had the opportunity to attend a tasting given by Doug Odell recently (more on that later this month) and his family-owned business produce wonderfully balanced beers out of Fort Collins, Colorado. This got me thinking about a number of beers, seasonal or otherwise, that are simply lacking in something. A fair few were using hop assertiveness as a sort of masking-agent in a similar manner to over seasoning a pasta sauce to cover up or more likely to compensate deficiencies. Now, this is where the comparison with football comes in.

Over recent seasons there’s been a rise in the number of goals scored in football matches (see below). In the Premier League for instance, the average has risen from approximately 2.5 goals per game to 2.8 since 2006. In the past three World Cups, it has been a rise from an average of 2.3 to just under 2.7 goals per game. More goals are being scored and worryingly less of premium is now placed on defence. The imbalance within teams can be seen. Take for instance Robin Van Persie and his £24 million transfer to Manchester United back in 2012. The club appears to have calculated in some sort of Moneyball-esque fashion that his 26 goals that title-winning season would more than offset the deficiencies in their back four. 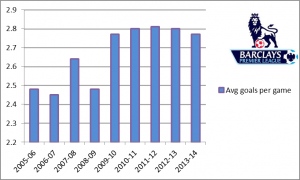 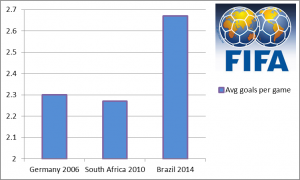 Beers can go one way or the other. They can be too sweet or eye-wateringly bitter but what makes a good beer is balance, a true skill and craft brewers often refine this through trial and error. We can see some of our favourite beers evolving over time but sadly the obverse is also true, how often can we read how some perennial favourites of old are no longer the same (Duvel anyone?). Balance in beer can be subjective of course. Hopheads for instance go looking for the bitterness, although they don’t want to search to hard; they’d rather be hit up front and have it continue right through to the end.

Balance in both beer and football depends on its constituent components. One doesn’t have to sacrifice itself for the sake of another however. A team that can score a shed load of goals and defend well can be a force to be reckoned with. The art of defending is not the same of playing defensively.  It can be the same with beer. Hops, malt, yeast and water can work together in harmony. Take a superb IPA like Magic Rock’s Cannonball, which has got the much desired hop aromas, flavour and bitterness in abundance but is importantly balanced by a sweet malt base. It brings out the sweet citrus flavours. Some of the newer European IPAs are swapping caramel and/or biscuit bases of their American cousins in favour of clean bodies that emphasise the freshness of the hops used. The same rings through with the use of other additions to beer (e.g. herbs, spices and fruit) and their respective impact on other ingredients. Too much coriander in a Belgian Wit for instance and that’s what dominates. 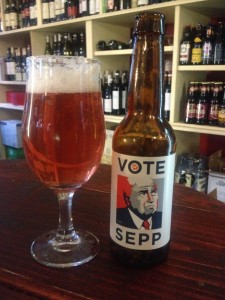 So last week I finally cracked open a bottle of Vote Sepp from BrewDog, a single hopped wheat beer with hibiscus flower. It’s the latest in their line of beer satirism and Ryanair-like tendency for self-promotion. Their target this time is “tireless football führer, Mr Blatter”, particularly due to the farcical awarding of the 2022 World Cup to Qatar (not just because they’re in the brewing game).

The beer is apparently “best served from brown paper envelopes to aid drinking with greased palms” but I only had a trusty tasting glass at hand. It poured like sparkling rosé, which raised some eyebrows from fellow customers. The head can be best described as a dollop or two of cream. The aroma consisted of floral notes. Thanks to the use of the Motueka hop, it drank dry and flowery. There were lemon and lime flavours too. However, it lacked the anticipated tartness and was more watery than flavoursome as one would hope from the addition of wheat. It was a beer that was lacking and thankfully trying this in Probus Wines, Paul suggested trying it with a squeeze of lemon juice to see how it would be with a higher level of tartness and it undoubtedly improved.

The beer is far from the promised “perfect balance of tartness, bitterness and body”. Was this the final satirical poke from the BrewDog boys?  Fifa, the Blatter-headed organisation, which manages the beautiful game is intensely disliked due to accusations of bribery, fraud and the like? Is it similar to watching the Premiership on Sky Sports that tells us the very game was a cracker even though we watched it with our very eyes and came to a different conclusion? If it is, then fair play to Fraserburgh’s finest for pulling it off, otherwise this beer is simply living off their hype. Some of these releases, while small batched, put me off their better balanced beers in terms of Punk IPA, the often under-appreciated 5am Saint and of course Hardcore IPA.

But with the new season upon us, one can only hope the quality of the football and the beer will improve through achieving better balance…